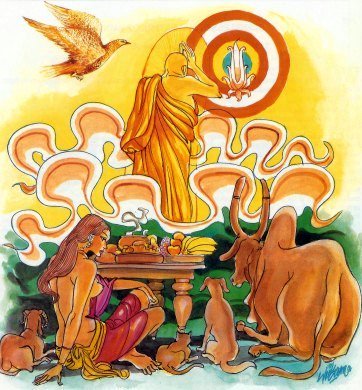 For whom pollutions are destroyed,
not attached to any food,
he has as range the nameless and
the void of perfect freedom too.
As birds that wing through space,
hard to trace his going.

Explanation: If one is totally free of influences, internal or external, that motivates human behaviour, and is not attached even to food, that kind of individual focuses his mind on emptiness, objectlessness and freedom of thought. The path of such saints is difficult to be traced, like the path of birds flying through the sky.

The Story of Venerable Anuruddha (Verse 93)

While residing at the Jetavana Monastery, the Buddha spoke this verse, with reference to Venerable Anuruddha.

One day, the Venerable, whose robes were worn out, was seeking material on refuse-heaps and in other similar places. Now in the Venerable’s third previous existence he had a wife who had been reborn in the World of the Thirty-three as the goddess Jalini. When the goddess saw the Venerable seeking cloths for robes, she resolved to aid him. So taking three celestial cloths thirteen cubits long and four cubits wide, and thinking to herself, “If I display these cloths in this manner, the Venerable will not take them” she went to a certain refuse-heap in front of the heap where the Venerable was seeking cloths and laid them down in such a way that only the hems were visible.

Taking the cloths with him, he went his way. On the day he was to make his robes, the Buddha, accompanied by his retinue of many monks, went to the monastery and sat down; likewise the eighty chief Venerables sat down there also. For the purpose of sewing the robes, Venerable Kassapa the Great sat at the foot, Venerable Sariputta in the midst, and Venerable Ananda at the head. The company of monks spun out the thread, the Buddha threaded the needle, and Venerable Mog-gallana went hither and thither supplying whatever else might be needed.

The goddess entered the village and incited the inhabitants to give alms, saying, “They are making robes for my noble Venerable Anuruddha. The Buddha, surrounded by the eighty chief disciples, and accompanied by his retinue of many monks, has gone to the monastery and sat down therein. Take rice-porridge and other provisions and go to the monastery” During the meal Venerable Moggallana brought large pieces of rose-apple, but the monks were unable to eat it. Sakka drew a circle about the place where they were making the robes; the earth was as if dyed with lac; there was a great heap of food both soft and hard remaining over and above to the monks who had eaten.

The monks were offended, and said, “Why should such a quantity of food be provided for so few monks?” When they told The Buddha, he said, “But, monks, you do not think that this was brought by any orders of Anuruddha, do you?” “Yes, Venerable; we do.” “Monks, my son Anuruddha does not talk thus. They that have rid themselves of the corruptions do not spend their time talking about requisites; nay, these provisions were produced by the supernatural power of a goddess.”