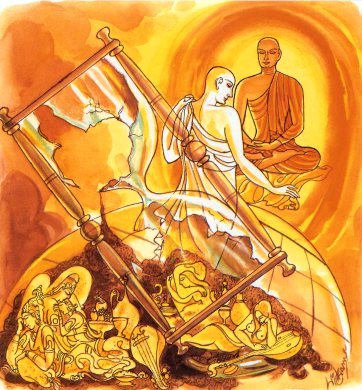 Abandoned all human bonds
and gone beyond the bonds of gods,
unbound one is from every bond,
that one I call a Brahmin True.

Explanation: He has given up the bonds that bind him to humanity. He has gone beyond the bonds of attachment to life in heaven as well. This way, he is disengaged from all bonds. I declare such a person a brahmana.

It is said that a certain mime, giving performances from place to place, heard the Buddha preach the Dhamma, whereupon he retired from the world, became a monk, and attained arahatship. One day, as he was entering the village for alms, in company with the congregation of monks presided over by the Buddha, the monks saw a certain mime going through his performance. Thereupon they asked the monk who was once a mime, “Brother, yonder mime is going through the same kind of performance you used to go through; have you no longing for this sort of life?” “No, brethren,” replied the monk. The monks said to the Buddha, “Venerable, this monk utters what is not true, is guilty of falsehood.” When the Buddha heard them say this, He replied, “Monks, my son has passed beyond all bonds.”