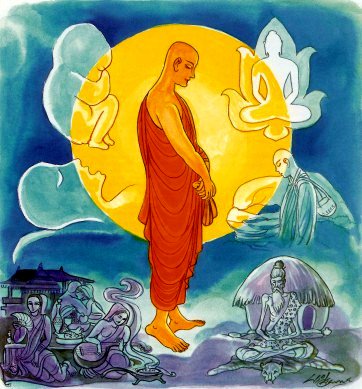 Who knows how clutching creatures die
to reappear in many a mode,
unclutching then, sublime, Awake,
that one I call a Brahmin True.

Explanation: He knows the death and birth of beings in every way. He is not attached to either birth or death. He has arrived at the proper destination. He possesses the knowledge of the essences. This person I describe as a brahmana.

After travelling from place to place, they finally reached Savatthi and took up their abode near the Jetavana. After breakfast they saw throngs of people going with perfumes, garlands, and the like in their hands to hear the Dhamma. “Where are you going?” they asked. “To the monastery to hear the Dhamma,” was the reply. ‘What will you gain by going there?” asked the brahmans; “there is nobody like our fellow brahman Vangisa. He can tell by rapping on the skulls of dead men in which of the states of existence they have been reborn. Just ask him in which of the states of existence your own kinsmen have been reborn” “What does Vangisa know!” replied the disciples, “there is no one like our Teacher, who is the Buddha.” But the brahmans retorted, “There is no one like Vangisa,” and the dispute waxed hot. Finally the disciples said, “Come now, let us go find out which of the two knows the more, your Vangisa or our Teacher.” So taking the brahmans with them, they went to the Monastery.

The Buddha, knowing that they were on their way, procured and placed in a row five skulls, one each of men who had been reborn in the four states of existence: hell, the animal world, the world of men, and the world of the deities; and one skull belonging to a man who had attained arahatship. When they arrived, He asked Vangisa, “Are you the man of whom it is said that by rapping on the skulls of dead men you can tell in which of the states of existence they have been reborn?” “Yes,” said Vangisa. “Then whose is this skull?” Vangisa rapped on the skull and said, “This is the skull of a man who has been reborn in Hell.” “Good! good!” exclaimed the Buddha, applauding him. Then the Buddha asked him about the next three skulls, and Vangisa answered without making a mistake. The Buddha applauded him for each answer he gave and finally showed him the fifth skull. “Whose skull is this?” he asked. Vangisa rapped on the fifth skull as he had on the others, but confessed that he did not know in which of the states of existence the man had been reborn.

Then said the Buddha, “Vangisa, don’t you know?” “No,” replied Vangisa, “I don’t know.” “I know,” the Buddha said. Thereupon, Vangisa asked him, “Teach me this charm.” “I cannot teach it to one who is not a monk.” Thought the brahman to himself, “If I only knew this charm, I should be the foremost man in all Jambudipa.” Accordingly, he dismissed his fellow brahmans, saying, “Remain right here for a few days; I intend to become a monk.” And he became a monk in the name of the Buddha, was admitted a full member of the Sangha, and was thereafter known as Venerable Vangisa.

They gave him as his meditation topic the thirty-two constituent parts of the body and said to him, “Repeat the preliminary words of the formula.” He followed their instructions and repeated the preliminary words of the formula. From time to time, the brahmans would ask him, “Have you learned the formula?” and the Venerable would answer, “Just wait a little! I am learning it.” In but a few days he attained arahatship. When the brahmans asked him again, he replied, “Brethren, I am now unable to learn it.” When the monks heard his reply, they said to the Buddha, “Venerable, this monk utters what is not true and is guilty of falsehood.” The Buddha replied, “Monks, say not so. Monks, my son now knows all about the passing away and rebirth of beings.”