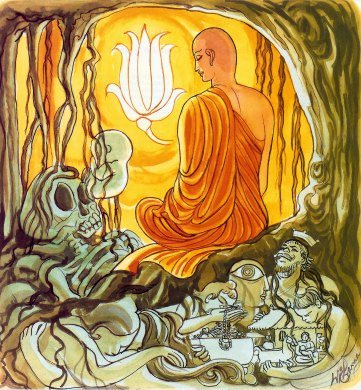 That one who’s free of everything
that’s past, that’s present, yet to be,
who nothing owns, who’s unattached,
that one I call a Brahmin True.

Explanation: Their path, neither gods, nor spirits, nor humans can fathom. Their taints are totally eradicated. They have attained the higher spiritual state. This person I declare a brahmana.

For one day, while she was living in the world, her husband Visakha, a lay disciple, heard the Buddha preach the Dhamma and attained the fruit of the third path. Thereupon he thought to himself, “I must now turn over all of my property to Dhammadinna.” Now it had previously been his custom on returning home, in case he saw Dhammadinna looking out of the window, to smile pleasantly at her. But on this particular day, although she was standing at the window, he passed by without so much as looking at her. “What can this mean?” thought she. “Never mind, when it is mealtime, I shall find out.” So when meal-time came, she offered him the usual portion of boiled rice. Now on previous days it had been his custom to say, “Come, let us eat together.” But on this particular day he ate in silence, uttering not a word. “He must be angry about something,” thought Dhammadinna. After the meal Visakha settled himself in a comfortable place, and summoning Dhammadinna to his side, said to her, “Dhammadinna, all the wealth that is in this house is yours. Take it!” Thought Dhammadinna, “Persons who are angry do not offer their property and say, Take it! What can this mean?” After a time, however, she said to her husband, “But, husband, what about you?” “From this day forth, I shall engage no more in worldly affairs.” ‘Who will accept the saliva you have rejected? In that case permit me also to become a nun.” “Very well, dear wife,” replied Visakha, giving her the desired permission. And with rich offerings he escorted her to the nuns convent and had her admitted to the Sangha. After she had made her full profession she was known as the nun Dhammadinna. Dhammadinna yearned for the life of solitude and so accompanied the nuns to the country. Residing there, in no long time she attained arahatship together with the supernatural faculties. Thereupon she thought to herself, “Now, by reason of me, my kinsfolk will perform works of merit” Accordingly she returned once more to Rajagaha. When the lay disciple Visakha heard that she had returned, he thought to himself, “What can be her reason for returning? ” And going to the nuns convent and seeing the nun, his former wife, he saluted her and seated himself respectfully on one side. He thought, “It would be highly improper for me to say to her, ‘noble sister, pray are you discontented?’ will therefore ask her this question” So he asked her a question about the path of conversion, and she immediately answered it correctly. Continuing this line of questioning, the lay disciple asked about the remaining paths also. He did not stop, however, at this point, but continuing his questions, asked her about arahatship. ‘Wonderful, brother Visakha’ exclaimed Dhammadinna, “But if you desire to know about arahatship, you should approach the Buddha and ask him this question” Visakha saluted the nun his former wife, and rising from his seat and going to the Buddha, told the Buddha about their talk and conversation. Said the Buddha, “What my daughter Dhammadinna said was well said. In answering this question I also should answer it as follows” Then he gave the stanza.