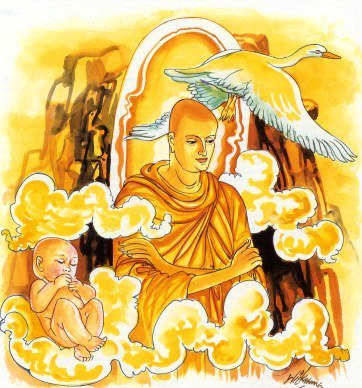 For those who don’t accumulate,
who well reflect upon their food,
they have as range the nameless and
the void of perfect freedom too.
As birds that wing through space,
hard to trace their going.

Explanation: With full understanding that nature is empty and objectless the mind is free of craving and leaves no trace of its whereabouts like the paths of birds in flight.

The Story of Venerable Bellatthisisa (Verse 92)

While residing at the Jetavana Monastery, the Buddha spoke this verse, with reference to Venerable Bellatthisisa.

Venerable Bellatthisisa, after going on an alms-round in the village, stopped on the way and took his food there. After the meal, he continued his round of alms for more food. When he had collected enough food he returned to the monastery, dried up the rice and hoarded it. Thus, there was no need for him to go on an alms-round every day; he then remained in jhana (one-pointed) concentration for two or three days. Arising from jhana concentration he ate the dried rice he had stored up, after soaking it in water. Other monks thought ill of the thera on this account, and reported to the Buddha about his hoarding of rice. Since then, the hoarding of food by the monks has been prohibited.

As for Venerable Bellatthisisa, since he stored up rice before the ruling on hoarding was made and because he did it not out of greed for food, but only to save time for meditation practice, the Buddha declared that the thera was quite innocent and that he was not to be blamed.