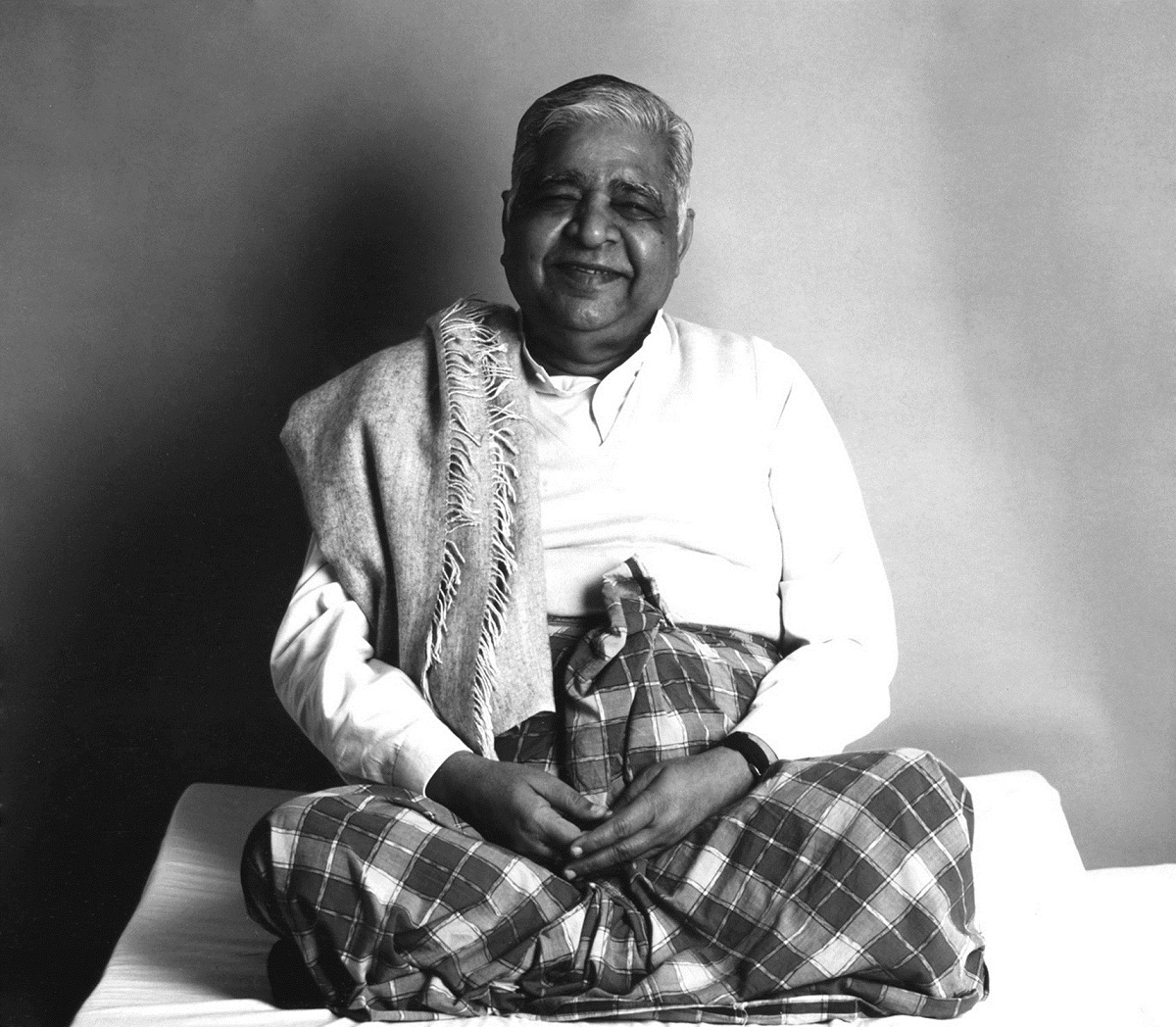 Satya Narayan Goenka was the foremost lay teacher of Vipassana meditation of our time.

Although Indian by descent, Mr. Goenka was born and raised in Myanmar (Burma). While living there, he had the good fortune to come into contact with Sayagyi U Ba Khin and to learn the technique of Vipassana from him. After receiving training from his teacher for 14 years, Mr. Goenka settled in India and began teaching Vipassana in 1969. In a country still sharply divided by differences of caste and religion, the courses offered by Mr. Goenka soon attracted thousands of people from every part of society. In addition, many people from countries around the world came to join courses in Vipassana meditation.

Over a period of almost 45 years, Mr. Goenka and the teachers appointed by him taught hundreds of thousands of people in courses in India and other countries, East and West. Today, meditation centers established under his guidance are operating in Asia, Europe, the Americas, Africa and Australasia.

The technique taught by S.N. Goenka goes back two and a half millennia to the Buddha. The Buddha never taught a sectarian religion; he taught Dhamma – the way to liberation – which is universal. In the same tradition, Mr. Goenka’s approach is totally non-sectarian. For this reason, his teaching has had a profound appeal to people of all backgrounds, of every religion and no religion, and from every part of the world.

Mr. Goenka was the recipient of many awards and honors in his lifetime, including a prestigious Padma Awards from the President of India in 2012. This is one of the highest civilian awards given by the Indian Government.

Satya Narayan Goenka breathed his last in September 2013, at the age of 89. He has left behind an imperishable legacy: the technique of Vipassana, now available more widely than ever before to people around the world.

NEW YORK – Vipassana Acharya S. N. Goenka addressed the delegates to the Millennium World Peace Summit as they gathered in the United Nations General Assembly Hall today – first ever gathering of religious and spiritual leaders in the UN.

Mr. Goenka’s speech, in the session entitled Conflict Transformation, focussed on the themes of religious harmony, tolerance and peaceful coexistence.

Mr. Goenka gave his speech during the Summit’s afternoon session to a group that included roughly two thousand delegates and observers. Mr. Goenka spoke in the session that followed CNN founder Ted Turner’s speech. Mr. Turner is one of the Summit’s financial patrons.

In keeping with the Summit’s theme of seeking world peace, Mr. Goenka stressed in his speech that peace in the world cannot be achieved unless there is peace within individuals. “There cannot be peace in the world when people have anger and hatred in their hearts. Only with love and compassion in the heart is world peace attainable.”

An important aspect of the Summit is the effort to reduce sectarian conflict and tension. Regarding this Mr. Goenka said, “When there is anger and hatred within, one becomes miserable irrespective of whether one is a Christian or a Hindu or a Muslim.”

Similarly he said to a thunderous applause, “One who has love and compassion with a pure heart experiences the Kingdom of Heaven within. This is the Law of Nature, or if one would rather, God’s will.”

Appropriately to a crowd that included major world religious leaders he said, “Let us focus on the commonalties of all religions, on the inner core of all religions which is purity of heart. We should all give importance to this aspect of religion and avoid conflict over the outer shell of the religions, which is various rites, rituals, festivals and dogmas.”

U.N. Secretary-General Kofi Annan has called the Summit “a gathering of the world’s pre-eminent religious and spiritual leaders in a united call for peace that will hopefully strengthen the prospect for peace as we enter the new millennium.”

In reference to the participants’ religious and cultural diversity, Annan has said, “the United Nations is a tapestry, not only of suits and saris but of clerics’ collars, nuns’ habits and lamas’ robes; of miters, skullcaps and yarmulkes.”

Though Annan has been repeatedly questioned about the Tibetan leaders absence, he has attempted to steer questions back to the Summit’s goal, which he says are “to restore religion to its rightful role as peacemaker and pacifier – the problem of conflict is never the Bible or the Torah or the Koran. Indeed, the problem is never the faith – it is the faithful and how we behave towards each other. You must, once again, teach your faithful the ways of peace and the ways of tolerance.”

The U.N. leader’s hope is that since 83% of the world’s population adheres to a formal religious or spiritual belief system, these religious leaders can influence their followers towards peace.

The U.N. is hoping the conference will move the world community towards, in the words of one document, “to acknowledge its spiritual potential and recognize that it is within our power to eradicate the worst form of human brutality – war – as well as one of the root causes of war – poverty. The time is ripe for the world’s spiritual leadership to work more closely with the United Nations in its effort to address the pressing needs of humankind.”

The Summit will end this Thursday on 31 August when participants will sign a Declaration for World Peace and form an International Advisory Council of Religious and Spiritual Leaders, which will work with the United Nations and the U.N. Secretary-General in peacemaking and peacekeeping efforts.

“The goal of the International Advisory Council of Religious and Spiritual Leaders is to enhance and strengthen the work of the United Nations,” said Bawa Jain, the Secretary-General of the World Peace Summit. “It is our earnest hope that in times of conflict, the world’s great religious and spiritual leaders can be parachuted into these hotspot to seek non-violent resolutions to the conflicts.”