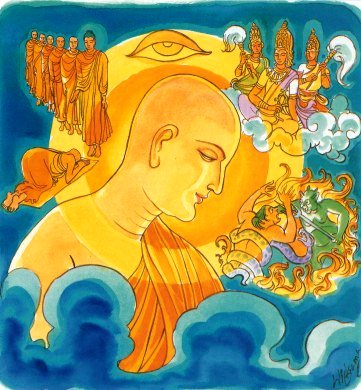 Who so does know of former lives
and sees the states of bliss and woe
and then who’s reached the end of births,
a sage supreme with wisdom keen,
complete in all accomplishments,
that one I call a Brahmin True.

It is the Giver that makes the Gift (Verse 423)

This verse was spoken by the Buddha while He was in residence at Jetavana, with reference to a question asked by Brahman Devahita.

The brahman thought to himself, “To whom should one give alms to obtain a great reward? I will ask the Buddha.” So he went to the Buddha and asked him about the matter, giving this stanza:

To whom shall one give alms?

To whom must alms be given to get a great reward?

How, for the giver, does the reward become a great one?

Said the Buddha to the brahman, ‘The alms of such a brahman as this, yield abundant fruit’ And proclaiming his conception of the true brahman, He gave the stanza.