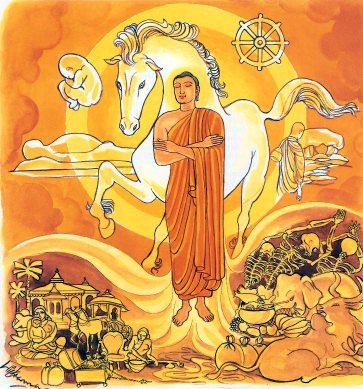 One noble, most excellent, heroic too,
great sage and one who conquers all,
who’s faultless, washed, one Awake,
that one I call a Brahmin True.

Explanation: He is a great sage as he has realized the essentials. He has conquered death. He is devoid of blemishes. He has washed away all evil. He has awakener to the essentials. That person, I describe as a brahmana.

The Story of Angulimala the Fearless (Verse 422)

This religious instruction was given by the Buddha while He was in residence at Jetavana, with reference to Venerable Angulimala. This story is related in the commentary on the stanza beginning ‘The niggardly go not to the world of the deities’ For it is there said: The monks asked Angulimala, “Brother Angulimala, were you not afraid when you saw the rogue elephant standing before you holding a parasol?” “No, brethren, I was not afraid.” The monks said to the Buddha, “Venerable, Angulimala utters falsehood.” The Buddha replied, “Monks, my son Angulimala has no fear. For monks like my son are of all the noble ones who have rid themselves of the depravities the noblest, and have no fear.”

The story of Angulimala: This was a man of extremes. He is of a unique record. A bandit who has made good. His career offers a contrast. He was born to a counsellor, called Bhaggawa, to the king of Kosala. According to custom the child was sent to the university of Taxila where he had a distinguished career. His name was converted to Ahimsaka (harming none) partly because he hailed from a family whose shield was untarnished by crime, and partly because of the child’s character. He excelled in study and in sports. Soon, he incurred the jealousy and hostility of his colleagues who plotted against him. But he was very strong due to his ministrations in a former birth to a Pacceka Buddha.

His enemies could not prevail against him. He was a favourite of the vice chancellor of the university. Soon, he incurred hostility due to the whispering campaigns of his enemies. They spoke of his illicit love to his wife. But he, too, being a clever and learned man, bided his time to compass his death. When the leave-taking took place, he asked for the usual tribute due from a student to a teacher in the shape of an extraordinary request. He asked for one thousand right thumbs of human-beings. Ahimsaka was taken aback and promptly refused so sanguinary a request. But the end was adamant. In the event of refusal a curse would be on him.

Again and again he pleaded in vain for another tribute. There was no escape from the rigid ancient custom as the tribute was in lieu of past tuition fees. So Ahimsaka demurred – consented in order to preserve the learning, for a refusal would act as a blight. Having armed himself, he repaired to the forest called Jalita in the Kosala kingdom. He killed all and sundry who ventured into his domain. But the thumbs could not be preserved. Either the wild animals ate them, or they became rotten. He therefore got a garland made and was wearing it. Hence he was called Anguli Mala’ He had 999 thumbs and was anxious to secure one more to close this bloody chapter. His teacher thought Anguli Mala would never survive the campaign. He would assuredly be slain in the process, or taken captive by the king. It was a fateful morning.

The king, on receiving complaints from the people was setting out to capture the bandit, dead or alive. His mother Mantani was anxious about the fate of her son. She implored her husband to warn the son of the impending danger. But he would have none of it. So the mother’s love urged her to plunge into the forest, alone crying out that the son must pay heed to the family tradition by giving up killing and that the king’s army was on the march to capture him. It was very likely that the bandit might not spare his own mother, for he was desperate.

The all-compassionate Buddha saw his impending doom. He knew that he was destined to be an arahat in this very life. He saw the possibilities of redemption. So He planted Himself, despite warnings from the passers by, between the robber and his mother. Here the robber saw that the perfect thumb of the Buddha would be a fitting finale to the series of bloody thumbs. So Anguli Mala hurried towards the Buddha as was his custom with his sword up lifted. The Buddha was going at a measured pace, but with all his speed Anguli Mala was not able to catch up the Buddha. This was willed by the Buddha. It was a psychic feat of the Buddha.

Anguli Mala had come to the end of his tether by running so fast and so long. In utter desperation, with beads of perspiration coursing from his body he shouted out to the Buddha to stop – Tittha Samana. But the Buddha said that he had stopped. He, too, must also stop. The word ‘stop’ galvanised him. To a potential arahat it has a wealth of meaning. It was closely related to samsara – this ceaseless round of births and deaths. He asked the meaning of the word which he had temporarily lost sight of. When he was running the Buddha must have moved, so thought Anguli Mala. Could it be that the Buddha was guilty of a falsehood.

So Anguli Mala requested the Buddha to unfold the meaning of stopping. This was the opening the Buddha sought and the Buddha preached with precision and unerring skill. Anguli Mala flung the garland and weapons aside. He begged for ordination. At the end of the sermon he became an arahat by the application of ‘ehi bhikkhu’ formula of the Buddha. With Anguli Mala the arahat the Buddha went back to the temple.

It was the custom of the king to visit the Buddha on the eve of a hazardous campaign. The Buddha inquired the cause of the armed expedition. The king explained. The Buddha told the king that Anguli Mala was in the temple.

Hearing the very name mentioned the king was trembling. So fearsome was the report of Angulimala. The Buddha hastened to explain that Anguli Mala in the temple was a far different being from the bloody bandit he was; Anguli Mala would not now even harm an ant.

The Buddha asked him to meditate upon the power of truth – inasmuch as Anguli Mala was entirely devoid since birth of cruelty, so by virtue of that truth, the suffering may be assuaged. Such was the blessing he was asked to give.