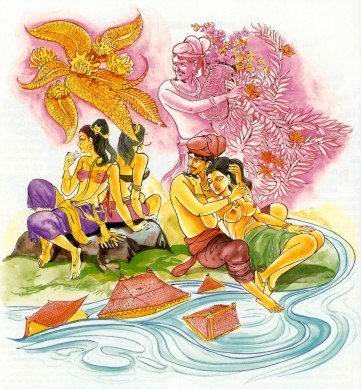 For one who has a clinging mind
and gathers only pleasure-flowers,
Death does seize and carry away
as great flood a sleeping village.

Explanation: Those men and women , fascinated by worldly things, go about seeking pleasure, like a garland-maker picking the flowers of his choice in a garden. But, gradually and silently, death overcomes them like a flood in the night sweeping away a village asleep.

The Story of Vidudabha (Verse 47)

While residing at the Jetavana Monastery, the Buddha spoke this verse, with reference to Vidudabha, son of King Pasenadi of Kosala.

When the prince was sixteen years old, he was sent on a visit to King Mahanama and the Sakyan princes. There he was received with some hospitality but all the Sakyan princes who were younger than Vidudabha had been sent away to a village, so that they would not have to pay respect to Vidudabha. After staying a few days in Kapilavatthu; Vidudabha and his people left for home. Soon after they left, a slave girl was washing with milk at the place where Vidudabha had sat; she was also cursing him, shouting, “This is the place where that son of a slave woman had sat…”. At that moment, a member of Vidudabha’s entourage returned to fetch something which he had left at the place and heard what the slave girl said. The slave girl also told him that Vidudabha’s mother, Vasabha-khattiya, was the daughter of a slave girl belonging to Mahanama.

When Vidudabha was told about the above incident, he became wild with rage and declared that one day he would wipe out the whole clan of the Sakyans. True to his word, when Vidudabha became king, he marched on the Sakyan clan and massacred them all, with the exception of a few who were with Mahanama and some others. On their way home, Vidudabha and his army encamped on the sandbank in the Aciravati River. As heavy rain fell in the upper parts of the country on that very night, the river swelled and rushed down with great force carrying away Vidudabha and his whole army.

On hearing about these two tragic incidents, the Buddha explained to the monks that his relatives, the Sakyan princes, had in one of their previous existences, put poison into the river killing fish. It was a result of that particular action, the Sakyan princes had died. Then, referring to the incident about Vidudabha and his army, the Buddha recited the stanza.