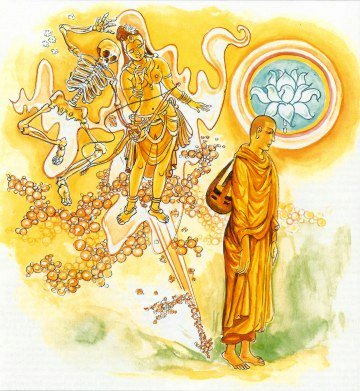 Having known this froth-like body
and awakening to its mirage nature,
smashing Mara’s flowered shafts
unseen beyond the Death-king go.

Explanation: This body of ours is like froth, bubbles, or foam. It disintegrates quickly. The nature of life is like a mirage, an illusion. Therefore, one must give up these unrealities. To achieve that one must destroy Mara’s flower-arrows by which he tempts men and women. It is necessary that the truth-seeker should go beyond Mara’s region, to areas unseen by him. Mara knows only the realm of death. The truth seeker goes beyond that region to the ‘deathless’ (Nibbana) – a domain Mara has never seen.

While residing at the Jetavana Monastery, the Buddha spoke this Verse, with reference to a certain monk.

A monk obtained a meditation topic from the Buddha and entered the forest for the purpose of practising meditation. But when, after striving and struggling with might and main, he was unable to attain arahatship, he said to himself, “I will ask the Buddha to give me a meditation topic that better suits my needs.” With this thought in mind he set out to return to the Buddha.

On the way he saw a mirage. He said to himself, “Even as this mirage, as seen in the season of the heat, appears substantial to those that are far off, but vanishes on nearer approach, so also is this existence unsubstantial by reason of birth and decay” Upon fixing his mind on the mirage, he meditated on the mirage. On his return, wearied with the journey, he bathed in the Aciravati River and seated himself in the shade of a tree on the river bank near a waterfall. As he sat there watching the white water bursting from the force of the water striking against the rocks, he said to himself, “Just as this existence produced and just so does it burst.” And this he took for his meditation topic.

The Buddha, seated in his perfumed chamber, saw the elder and said, “Monk, it is even so. Like a bubble of foam or a mirage is this existence. Precisely thus is it produced and precisely thus does it pass away” And when He had thus spoken the Buddha pronounced the stanza.