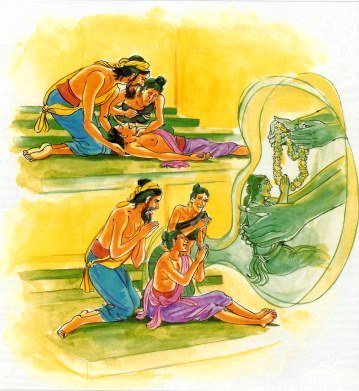 What one’s mother, what one’s father,
whatever other kin may do,
the well directed mind indeed
can do greater good.

The Story of Soreyya (Verse 43)

While residing at the Jetavana Monastery, the Buddha spoke this verse, with reference to Soreyya, the son of a rich man of the city of Soreyya. On one occasion, Soreyya accompanied by a friend and some attendants was going out in a carriage for a bath. At that moment, monk Mahakaccayana was adjusting his robes outside the city, as he was going into the city of Soreyya for alms-food. The youth Soreyya, seeing the youthful complexion of the monk, thought, “How I wish the monk were my wife, so that the complexion of my wife would be like his” As the wish arose in him, his sex changed and he became a woman. Very much ashamed, he got down from the carriage and ran away, taking the road to Taxila. His companions looked for him, but they could not find him.

Soreyya, now a woman, offered her signet ring to some people going to Taxila, to allow her to go with them in their carriage. Upon arrival at Taxila, her companions told a young rich man of Taxila about the lady who came along with them. The young rich man, finding her to be very beautiful and of a suitable age for him, married her. As a result of this marriage two sons were born; there were also two sons from the previous marriage of Soreyya as a man.

One day, a rich man’s son from the city of Soreyya came to Taxila with a caravan of five hundred carts. Lady Soreyya, recognizing him to be an old friend, sent for him. The man from Soreyya was surprised that he was invited, because he did not know the lady who invited him. He told the Lady Soreyya that he did not know her, and asked her whether she knew him.

She answered that she knew him and also enquired after the health of her family and other people in the city of Soreyya. The man from Soreyya next told her about the rich man’s son who disappeared mysteriously while going for a bath.

Then the Lady Soreyya revealed her identity and related all that had happened, about the wrongful thoughts with regard to monk Mahakaccayana, about the change of sex, and her marriage to the young rich man of Taxila. The man from the city of Soreyya then advised the Lady Soreyya to ask pardon from the monk. Monk Mahakaccayana was accordingly invited to the home of Soreyya and alms-food was offered to him. After the meal, the Lady Soreyya was brought to the presence of the monk, and the man from Soreyya told the monk that the lady was at one time the son of a rich man from Soreyya. He then explained to the monk how Soreyya was turned into a female on account of his wrongful thoughts towards the respected monk.

Lady Soreyya then respectfully asked pardon of Monk Mahakaccayana. The monk then said, “Get up, I forgive you” As soon as these words were spoken, the woman was changed back to a man. Soreyya then pondered how within a single existence and with a single body he had undergone change of sex and how sons were born to him. And feeling very weary and repulsive of all these things, he decided to leave the householder’s life and joined the sangha under the monk.

After that, he was often asked, “Whom do you love more, the two sons you had as a man or the other two you had as a woman?” To those, he would answer that his love for those borne as a woman was greater. This question was put to him so often, he felt very much annoyed and ashamed. So he stayed by himself and, with diligence, contemplated the decay and dissolution of the body. He soon attained arahatship together with the analytical insight. When the old question was next put to him he replied that he had no affection for any one in particular. Other monks hearing him thought he must be telling a lie. When it was reported about Soreyya giving a different answer, the Buddha said, “My son is not telling lies, he is speaking the truth.”