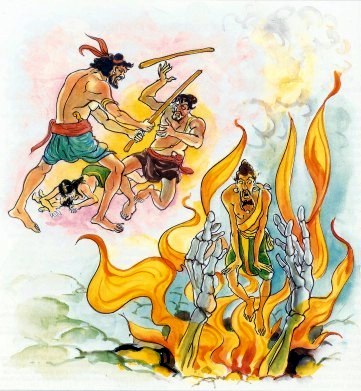 Whatever foe may do to foe,
or haters those they hate
the ill-directed mind indeed
can do one greater harm.

Explanation: When one bandit see another, he attacks the second bandit. In the same way, one person sees someone he hates, he also does harm to the hated person. But what the badly deployed mind does to the possessor of that mind is far worse than what a bandit would do to another bandit or what one hater will do to another hater.

The Story of Nanda, the Herdsman (Verse 42)

While on a visit to a village in the kingdom of Kosala, the Buddha spoke this verse, with reference to Nanda, the herdsman.

Nanda was a herdsman who looked after the cows of Anathapindika. Although only a herdsman, he had some means of his own. Occasionally, he would go to the house of Anathapindika and there he sometimes met the Buddha and listened to his discourses. Nanda requested the Buddha to pay a visit to his house. But the Buddha did not go to Nanda’s house immediately, saying that it was not yet time.

After some time, while travelling with his followers, the Buddha went off his route to visit Nanda, knowing that the time had come for Nanda to receive his teaching properly. Nanda respectfully received the Buddha and his followers; he served them milk and milk products and other choice foods for seven days. On the last day, after hearing the discourse given by the Buddha, Nanda attained sotapatti fruition. As the Buddha was leaving that day, Nanda carrying the bowl of the Buddha, followed him for some distance, paid obeisance and turned back to go home.

At that instant, a stray arrow shot by a hunter, killed him. Later the monks, who were following the Buddha, saw Nanda lying dead. They reported the matter to the Buddha, saying, “Venerable, because you came here, Nanda who made great offerings to you and accompanied you on your return was killed as he was turning back to go home.” To them, the Buddha replied, “Monks, whether I came here or not, there was no escape from death for him because of his previous kamma.”