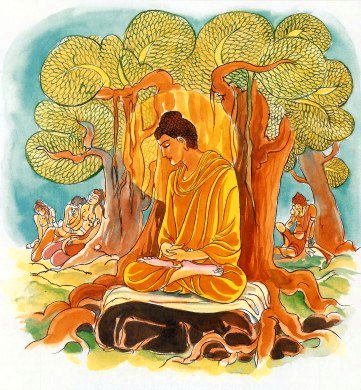 That Buddha traceless of infinite range
whose victory none may e’er undo,
whose vanquished follow to no world,
then by which track will you trace him?

Explanation: The Buddha’s victory has not been won incorrectly. No one can turn Buddha’s victory into defeat. Nothing that he has conquered can return, or pursue him, because his conquest is so complete: His ken infinite, In what way can you tempt or ensnare him.

While residing near the Bodhi-tree, the Buddha spoke these verses, with reference to the three daughters of Mara. He repeated these verses to the brahmin Magandiya of the kingdom of Kurus. A brahmin named Magandiya, dwelling in the kingdom of the Kurus, had a daughter likewise named Magandiya, who possessed surpassing beauty Many men of wealth and social position, both brahmins and khattiyas, desired to have her as wife and sent word to Magandiya, saying, “Give us your daughter” But he refused them all alike, saying, “You are not good enough for my daughter”

Now one day, as the Buddha surveyed the world at early dawn, he perceived that Magandiya had entered the net of his knowledge. Now the brahmin tended the fire regularly every day outside the village; accordingly the Buddha took bowl and robe early in the morning and went to that very place. The brahmin surveyed the majestic form of the Buddha and thought to himself, “There is no man in this world comparable to this man; this man is suitable for my daughter; I will give my daughter to this man.” So he said to the Buddha, “Venerable, I have a single daughter, and I have looked in vain to find a man suitable to be her husband. I have not given her to any one. But you are suitable for her. I wish to give you my daughter in marriage; wait right here until I fetch her.” The Buddha listened to his words, but expressed neither approval nor disapproval.

So the brahmin had his daughter arrayed in her beautiful garments, and taking the daughter and his wife with him, went to the place where he had met the Buddha. The Buddha, instead of remaining in the place mentioned by the brahmin, moved away and stood in another place, leaving a footprint where he had stood before.

The brahmin’s wife, who accompanied him, asked him, ” Where is this man?” The brahmin replied, “I said to him, Remain in this place.” Looking around, the brahmin saw the footprint and showed it to his wife, saying, “This is his foot-print”. The brahmin’s wife was familiar with the verses relating to signs and immediately said to the brahmin, “Brahmin, this is no footprint of one who follows the five lusts.” The brahmin replied, “Wife, you always see a crocodile in a drop of water. When I said to that monk, I will give you my daughter, he accepted my proposal.” The brahmin’s wife replied, “Brahmin, you may say what you like, but this is the footprint only of one who is free from lust.” Then said the brahmin to his wife, “Wife, do not rattle on thus; come with me in silence.” Advancing a little way, he saw the Buddha, whereupon he pointed to him and said, “There is the man!” And approaching the Buddha, he said, “Venerable, I will give you my daughter to be your wife.” The Buddha, instead of saying, “I have no need of your daughter, Brahmin, I have something to say to you; listen to me.” The brahmin replied, “Say it; I will listen.” Thereupon the Buddha related to the brahmin the story of his past life, beginning with the Great Retirement. The Buddha, having renounced the glory of dominion, mounted his horse Kanthaka, and with Channa for companionship, proceeded forth on the Great Retirement. As he approached the gate of the city, Mara, who stood near, said to him, “Siddhattha, return upon your way; seven days hence the magic wheel of a universal monarch will be manifested to you” The Buddha replied, “I too know that, Mara, but I do not desire it.” “Then for what purpose are you going forth on your renunciation?” “That I may acquire omniscience.” “Well then, if from this day forth, you think a lustful or malevolent or cruel thought, I shall know what to do in your case.”

And, from that time on, Mara pursued him for seven years, awaiting his opportunity. For six years the Buddha practiced austerities, and when, through his individual effort, he had attained omniscience at the foot of the Bodhi-tree (Goatherd’s Banyan-tree) experiencing the bliss of emancipation. At that time Mara sat down by the highway, overwhelmed with sorrow at the thought, “All this time I have pursued him, seeking my opportunity, but have found no flaw in him; now he has escaped from my power.”

Now Mara’s three daughters, Craving, Sex and Passion, asked him, “Dear father, why are you so downcast and depressed?” He told them what was the matter. Then they said to him, “Dear father, be not disturbed; we will bring him under our control and fetch him hither.” Approaching the Buddha, they said to him, “We would be your humble slaves.” The Buddha paid no attention to their words, nor did he so much as open his eyes and look at them. Said the daughters of Mara again, “Many and various are the tastes of men. Some like maidens, others like women in the prime of life, others like women who have reached mid-life, while still others like women who have passed mid-life. We will tempt him in various forms. So one after another, they assumed the forms of women of various ages, creating by superhuman power, each a hundred female forms, and said to him, “We would be your humble slaves.”

The Buddha said to them, “Depart; what do you see, that you strive thus? Such actions as these should be performed before those who have not released themselves of the lusts and other evil passions. The Tathagata has rid himself of the lusts and other evil passions. Why would you try to bring me into your control?” When the Buddha had completed his biographical discourse, he said, “Magandiya, when long ago, I beheld these three daughters of Mara, possessed of bodies comparable to gold, free from phlegm and the other bodily impurities, even then I had no desire for sensual pleasures. But as for your daughter’s body, it is a body filled with thirty-two impurities of the body as if it were a vessel filled with impurities, but painted beautifully outside”