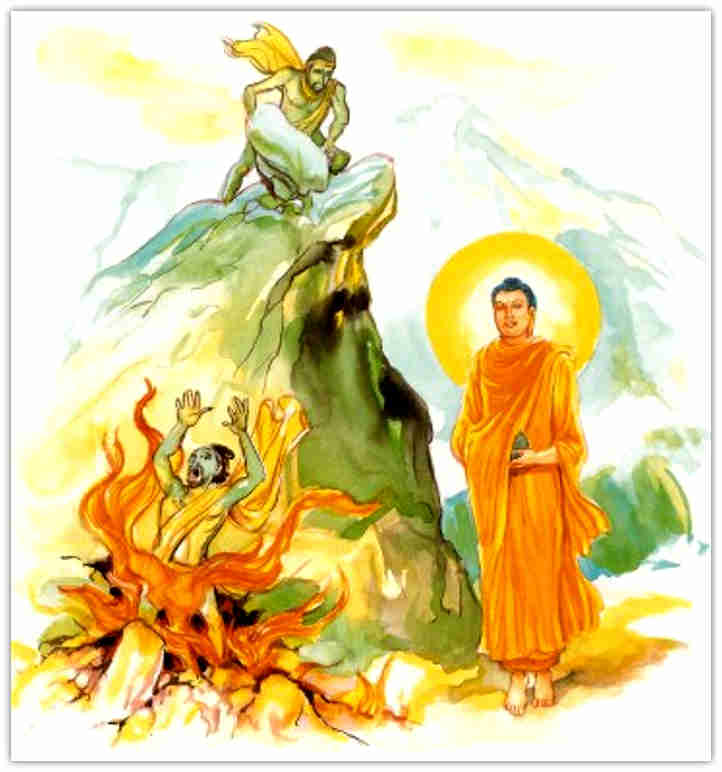 Here one burns, one burns hereafter,
in both ways does the evil-doer burn;
evil I’ve done, remorsefully one burns,
and more one burns passed to realms of woe.

Explanation: Those who do evil, those given to wrong doings, are tortured in mind both here and hereafter. Being born in a state of woe after death the doer of evil keeps on torturing himself more with the thought “I have done evil deeds.”

The Story of Devadatta (Verse 17)

While residing at the Jetavana Monastery in Savatthi, the Buddha spoke this verse, with reference to Devadatta.

Devadatta felt aggrieved and vowed vengeance against the Buddha. Three times, he attempted to kill the Buddha: first, by employing some archers; secondly, by climbing up the Gijjhakuta hill and rolling down a big piece of rock on to the Buddha; and thirdly, by causing the elephant Nalagiri to attack the Buddha. The hired assassins, instead of attacking the Buddha, became his disciples. The big piece of rock rolled down by Devadatta hurt the big toe of the Buddha just a little, and when the Nalagiri elephant rushed at the Buddha, it was made docile by the Buddha. Thus Devadatta failed to kill the Buddha, and he tried another tactic. He tried to break up the Order of the monks by taking away some newly admitted monks with him to Gayasisa; however most of them were brought back by Chief Disciples Sariputta and Maha Moggallana.

Devadatta fell ill. Devadatta’s sickness continued for nine months; at last, desiring to see the Buddha, he said to his own disciples, I desire to see the Buddha; make it possible for me to see him/ r They replied, ‘When you enjoyed good health, you walked in enmity with the Buddha; we will not lead you to him/ r Said Devadatta, “Do not destroy me; I have indeed conceived hatred towards the Buddha, but the Buddha has not cherished so much as the tip of a hair’s hatred towards me.” And in very truth towards the murderer Devadatta, towards the robber Angulimala, towards Dhanapala and Rahula, to each and all he manifested an even temper. At last, Devadatta wanted to see the Buddha. But when Devadatta alighted from his litter his feet sank into the earth. He was this way swallowed up by the earth and was taken to Avici Hell.

duggati: those people who are given to evil ways are born in woeful states after their death. Since, those states make the victims suffer they are described as Duggati. Opposed to these places of woe are Sugati states of bliss. Those who conduct themselves in virtuous ways are eventually reborn in such states.

idha tappati: the repentance of those who remember with mental torture the evil deeds they have done is referred to here. Tappati could be translated as burning. The memory of the evil action brings about self torture which is a kind of burning. This is the situation Devadatta found himself in.

pecca: in the worlds beyond: once a person dies he is born in another state which is the hereafter. He continues his activities in terms of the good or evil he had garnered while on earth. Therefore, pecca implies what happens to him hereafter.

Special note: Many are the questions that are raised about the future existences of Devadatta. Traditional commentaries state thus: There is a tradition that when the Buddha saw that matters had gone thus far, he made a monk of Devadatta. And this he did because he became aware of the following, “If he shall remain a layman and not be received into the Order as a monk, inasmuch as he has been guilty of grievous crimes, it will be impossible for him to look forward with confidence to future existence; but if he shall become a monk, no matter how grievous the crimes he has committed, it will be possible for him to look forward with confidence to future existence.” In the far future, according to this tradition, he will become a solitary Buddha (Pacceka Buddha) named Attissara.