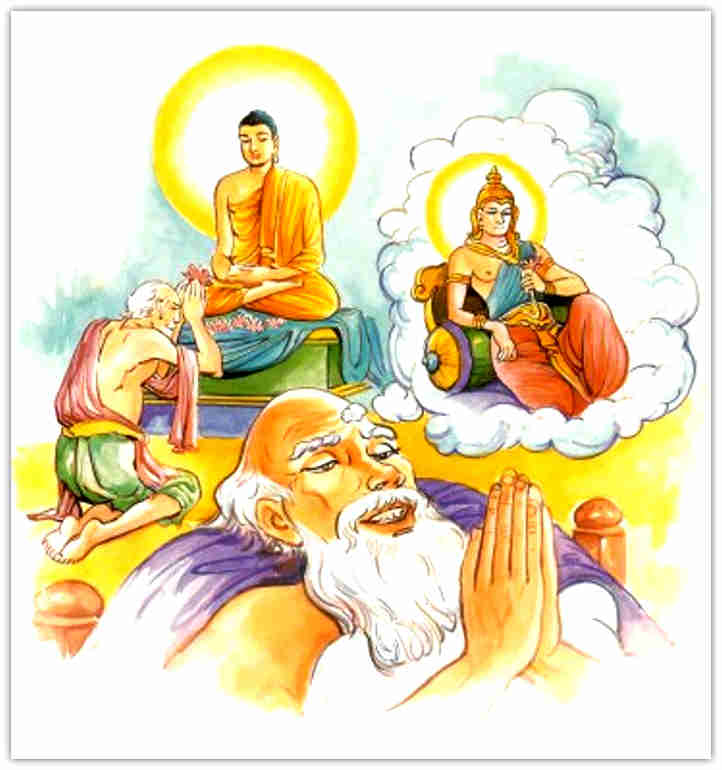 Here one joys, one joys hereafter,
in both ways does the merit-maker joy;
one joys and one rejoices,
one’s own pure kammas seeing.

Explanation: A wise person does good deeds. Having done those good deeds he rejoices here in this world. He rejoices in the life after as well. Seeing the purity of his virtuous actions, he rejoices. He is thoroughly joyous seeing the goodness of his deeds.

The Story of Dhammika Upasaka (Verse 16)

While residing at the Jetavana Monastery in Savatthi, the Buddha spoke this verse, with reference to Dhammika, a lay disciple.

Once there lived in Savatthi, a lay disciple by the name of Dhammika, who was virtuous and very fond of giving charity He generously offered food and other requisites to the monks regularly and also on special occasions. He was, in fact, the leader of five hundred virtuous lay disciples of the Buddha who lived in Savatthi. Dhammika had seven sons and seven daughters and all of them, like their father, were virtuous and devoted to charity. When Dhammika was very ill and was on his death-bed he made a request to the Sangha to come to his bedside and recite the sacred texts. While the monks were reciting the Mahasatipatthana Sutta, six decorated chariots from six celestial worlds arrived to invite him to their respective worlds. Dhammika told them to wait for a while for fear of interrupting the recitation of the Sutta. The monks, thinking that they were being asked to stop, stopped and left the place.

A little while later, Dhammika told his children about the six decorated chariots waiting for him. Then and there he decided to choose the chariot from the Tusita world and asked one of his children to throw a garland on to it. Accordingly the children of the layman threw the wreath of flowers, and it clung to the pole of the chariot and hung suspended in the air.

The populace saw the wreath of flowers suspended in the air, but did not see the chariot. Said Dhammika, “Do you see this wreath of flowers?” “Yes, we see it.” “This wreath hangs suspended from the chariot which came from the World of the Tusita gods. I am going to the World of the Tusita gods; do not be disturbed. If you desire to be reborn with me, do works of merit even as I have done.” Then he passed away and was reborn in the Tusita world. Thus, the virtuous man rejoices in this world as well as in the next. When those monks reached the Monastery, the Buddha asked them, “Monks, did the lay disciple hear the Dhamma?” “Yes, Venerable. But in the midst of the recitation he cried out, ‘Wait! Wait!’ and stopped us. Then his sons and daughters began to weep, whereupon we departed.” “Monks, he was not talking to you. From the Six Worlds of the Gods six deities approached in six magnificently adorned chariots, and they summoned that lay disciple to go with them; but the lay disciple, unwilling that the Dhamma should be interrupted, spoke to them.” Is that true, Venerable?” “That is true, monks.” “Venerable, where was he reborn just now?” In the World of the Tusita gods, monks.”

“Venerable, but recently he lived here among his kinsfolk rejoicing, and just now he went again to a place of rejoicing and was there reborn.” “Yes, monks. They that are heedful, be they laymen or monks, rejoice in both places equally.”

katapunno: Dhammika was in great joy in his death bed because he had accumulated a great amount of good deeds during his lifetime. An individual who can look upon a lifetime of virtuous conduct and, in consequence, can look forward to a birth after death in a pleasant state can be described as a Katapunno.

modati: rejoices. This is a state of mind of a person who has accumulated a lifetime of good conduct. He can feel a sense of joy at the end of his life as Lay Disciple Dhammika in this stanza.