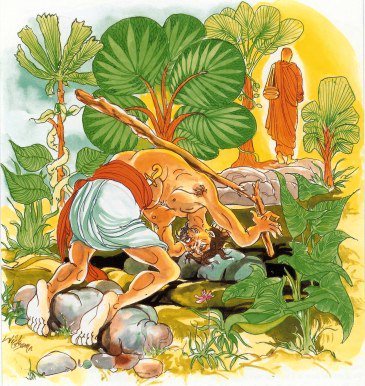 Whoever forces the forceless
or offends the inoffensive,
speedily comes indeed
to one of these ten states:

Explanation: If one attacks one who is harmless, or ill-treat innocent beings, ten woeful states lie here and now to one of which he shall befall.

“That is a way indeed!” exclaimed all the heretics. So all the heretics with one accord formed the resolution, “We will kill him by hook or by crook.” Accordingly they roused their own supporters, procured a thousand pieces of money, and formed a plot to kill Venerable Moggallana. Summoning some wandering thieves, they gave them the thousand pieces of money and said to them, “Venerable Moggallana lives at Black Rock. Go there and kill him”. The money attracted the thieves and they immediately agreed to do as they were asked. “Yes, indeed,” said the thieves; “we will kill the Venerable.” So they went and surrounded the Venerable’s place of abode.

The Venerable, knowing that his place of abode was surrounded, slipped out through the keyhole and escaped. The thieves, not seeing the Venerable that day, came back on the following day, and again surrounded the Venerable’s place of abode. But the Venerable knew, and so he broke through the circular peak of the house and soared away into the air. Thus did the thieves attempt both in the first month and in the second month to catch the Venerable, but without success. But when the third month came, the Venerable felt the compelling force of the evil deed he had himself committed in a previous state of existence, and made no attempt to get away.

At last the thieves succeeded in catching the Venerable. When they had so done, they tore him limb from limb, and pounded his bones until they were as small as grains of rice. Then thinking to themselves, “He is dead,” they tossed his bones behind a certain clump of bushes and went their way. The Venerable thought to himself, “I will pay my respects to the Buddha before I pass into Nibbana.” Accordingly he swathed himself with meditation as with a cloth, made himself rigid, and soaring through the air, he proceeded to the Buddha, paid obeisance to the Buddha, and said to him, “Venerable, I am about to pass into Nibbana.” “You are about to pass into Nibbana, Moggallana?” “Yes, Venerable.” “To what region of the earth are you going?” “To Black Rock, Venerable.” “Well then, Moggallana, preach the Law to me before you go, for hereafter I shall have no such disciple as you to look upon” ‘That will I do, Venerable’ replied Venerable Moggallana. So first paying obeisance to the Buddha, he rose into the air, performed all manner of miracles just as did the Venerable Sariputta on the day when he passed into Nibbana, preached the Dhamma, paid obeisance to the Buddha, and then went to Black Rock forest and passed into Nibbana.

Immediately the report spread all over South Asia. “Thieves have killed the Venerable.” Immediately King Ajata-sattu sent out spies to search for the thieves. Now as those very thieves were drinking strong drink in a tavern, one of them struck the other on the back and felled him to the ground. Immediately the second thief reviled the first, saying, “You scoundrel, why did you strike me on the back and fell me to the ground?” “Why, you vagabond of a thief, you were the first to strike Venerable Moggallana.” “You don’t know whether I struck him or not.” There was a babel of voices crying out, “was I struck him,  was I struck him.”

Those spies heard what the thieves said, captured all the thieves, and made their report to the king. The king caused the thieves to be brought into his presence and asked them, “Was it you that killed the Venerable?” “Yes, your majesty.” “Who, pray, put you up to it?” “The naked ascetics, your majesty,” The king had the five hundred naked ascetics caught, placed them, together with the five hundred thieves, waist-deep in pits which he had dug in the palace-court, caused their bodies to be covered over with bundles of straw, and then caused the bundles of straw to be lighted. When he knew that they had been burned, he caused their bodies to be plowed with iron plows and thus caused them all to be ground to bits.