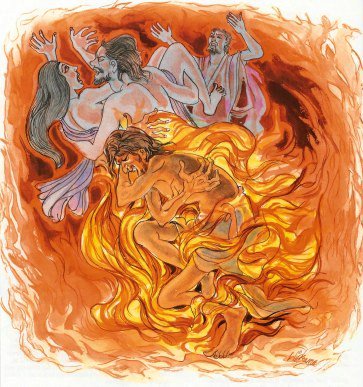 When the fool does evil deeds
their end he does not know,
such kamma burns the one unwise
as one who’s scorched by fire.

Explanation: Fools, unaware that evil rebounds, through evil acts they hurt themselves. As flies leap into fire and burn, their own executioners they become.

The Story of the Boa Constrictor Peta-Ghost (Verse 136)

While residing at the Jetavana Monastery, the Buddha spoke this verse, with reference to a boa constrictor peta-ghost.

When, therefore, Venerable Moggallana had completed his round for alms in Rajagaha, and had come into the presence of the Buddha, Venerable Lakkhana repeated his question. Venerable Moggallana replied as follows, “At that spot, brother, I saw a ghost, and his outward appearance was such and such. When I saw him, I thought to myself, ‘No such ghost as that did I ever see before’. That is why I smiled.” Then said the Buddha, “Monks, my disciples indeed possess eyes and use them.” Continuing, he confirmed the statement of the Venerable and added, “I saw that very ghost as I sat on the Throne of Enlightenment. However, the thought came into my mind ‘If any refuse to believe my word, it may be to their detriment’. Therefore I said nothing about it. But now that I have Moggallana for my witness, I do say it.” When he had thus spoken, in response to a request of the monks, he explained what the ghost had done in a previous state of existence.

The story goes that in the dispensation of the Buddha Kassapa, a treasurer named Sumangala spread the ground with bricks of gold for a space of twenty usabhas (fathoms), expended an equal amount of treasure in building a monastery, and an equal amount in giving a festival in honour of the opening of the monastery. One day, very early in the morning, as he was on his way to pay his respects to the Buddha, he saw hidden in a certain rest house at the gate of the city a certain thief, his feet spattered with mud, his robe drawn over his head. The treasurer said to himself, “This man with feet all spattered with mud must be some night-prowler in hiding.” “Never mind, I know how to get even with you,” thought the thief. And conceiving a grudge against the treasurer, he burned his field seven times, cut off the feet of the cattle in his cattle-pen seven times, and burned his house seven times.