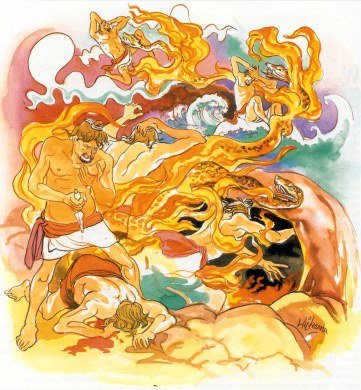 Neither in sky nor surrounding by sea,
nor by dwelling in a mountain cave,
nowhere is found that place in earth
where one’s from evil kamma free.

The Story of Three Groups of Persons (Verse 127)

The three groups of travelling monks went to the Buddha. Each group related to the Buddha what they had seen on their way and the Buddha answered their questions. The Buddha’s answer to the first group: “Monks, once there was a farmer who had a very lazy and stubborn ox. The farmer, in anger, tied a straw rope round the neck of the ox and set fire to it, and the ox died. On account of this evil deed, the farmer had suffered for a long time in Hell (Niraya) He had been burnt to death in the last seven existences.” The past actions brought on the present suffering. The Buddha’s answer to the second group: “Monks, once there was a woman who had a dog. Whatever she did and wherever she went the dog always followed her. As a result, some young boys would poke fun at her. She was very angry and felt so ashamed that she planned to kill the dog. She filled a pot with sand, tied it round the neck of the dog and threw it into the water; and the dog was drowned. On account of this evil deed, that woman had suffered for a long time and, in serving the remaining part of the effect, she had been thrown into the water to be drowned.” The Buddha’s answer to the third group: “Monks, once, seven cowherds saw an iguana going into a mound and, for fun, they closed all the outlets of the mound. After completely forgetting the iguana that was trapped in the mound. Only after seven days did they remember what they had done and hurried to the scene of their mischief to let the iguana out. On account of this evil deed, you seven have been imprisoned together for seven days without any food.” The Buddha replied, “Even in the sky or anywhere else, there is no place which is beyond the reach of the consequences of evil”.