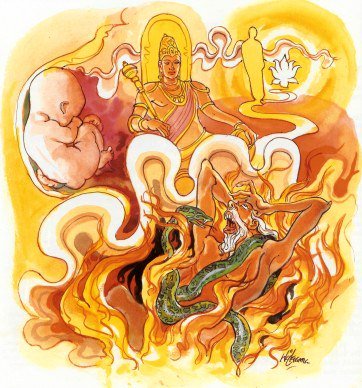 Some find birth within a womb,
evil-doer quicken in hell,
good-farers to the heavens go,
the Unpolluted wholly cool.

Explanation: Some, after death, receive conception in wombs, Those who have committed sins in their lifetime are reborn in hell. Those whose ways have been virtuous when they were alive go to heaven when they die. These blemishless ones who are totally free of taints and corruptions, achieve total Nibbana, on giving up their mortal lives.

The Story of Venerable Tissa (Verse 126)

While residing at the Jetavana Monastery, the Buddha spoke this verse, with reference to Venerable Tissa. Once, there was a gem polisher and his wife in Savatthi; there was also a Venerable (senior monk), who was an arahat. Every day, the couple offered alms-food to the Venerable. One day, while the gem polisher was handling meat, a messenger of King Pasenadi of Kosala arrived with a ruby, which was to be cut and polished and sent back to the king. The gem polisher took the ruby with his hand which was covered with blood, put it on a table and went into the house to wash his hands. The pet crane of the family, seeing the blood stained ruby and mistaking it for a piece of meat, picked it up and swallowed it in the presence of the Venerable. When the gem polisher returned, he found that the ruby was missing. He asked his wife and his son and they answered that they had not taken it. Then, he asked the Venerable who said that he did not take it. The gem polisher was not satisfied. As there was no one else in the house, the gem polisher concluded that it must be the Venerable who had taken the precious ruby: so he told his wife that he must torture the Venerable to get admission of theft.

But his wife replied, ‘This Venerable had been our guide and teacher for the last twelve years, and we have never seen him doing anything evil; please do not accuse the Venerable. It would be better to take the king’s punishment than to accuse a noble one.” But her husband paid no heed to her words; he took a rope and tied up the Venerable and beat him many times with a stick. As a result of this, the Venerable bled profusely from the head, ears and nose, and dropped on the floor. The crane, seeing blood and wishing to take it, came close to the Venerable. The gem polisher, who was by then in a great rage, kicked the crane with all his might and the bird died instantaneously. Then, the Venerable said, “Please see whether the crane is dead or not,” and the gem polisher replied, “You too shall die like this crane.” When the Venerable was sure the crane had died, he said, softly, “My disciple, the crane swallowed the ruby.”

Hearing this, the gem polisher cut up the crane and found the ruby in the stomach. Then, the gem polisher realized his mistake and trembled with fear. He pleaded with the Venerable to pardon him and also to continue to come to his door for alms. The Venerable replied, “My disciple, it is not your fault, nor is it mine. This has happened on account of what has been done in our previous existences; it is just our debt in samsara; I feel no ill will towards you. As a matter of fact, this has happened because I have entered a house. From today, I would not enter any house; I would only stand at the door.” Soon after saying this, the Venerable expired as a result of his injuries.