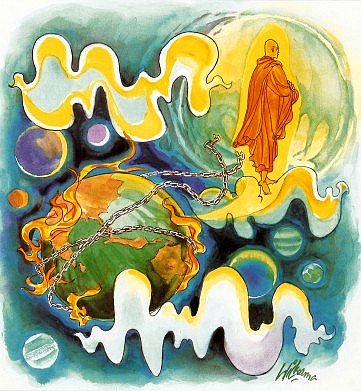 With journey finished and sorrowless,
from everything completely free,
for one who has loosened all the ties
passion’s fever is not found.

Explanation: The are at the journey’s end – their quest for liberation has succeeded. They are sorrowless and totally released in mind. They have got rid of all knots and no bonds bind them. In them no anxiety exists.

The Story of the Question Asked by Jivaka (Verse 90)

While residing at the mango-grove Monastery of Jivaka, the Buddha spoke this verse, with reference to the question raised by Jivaka to the Buddha.

Now on a certain occasion Devadatta joined forces with Ajatasattu, climbed Vulture Peak, and out of the wickedness of his heart, saying to himself, “I will kill the Buddha” hurled down a rock. Two mountain crags caught the rock and splintered it; but one of the flying pieces struck the foot of the Buddha and caused blood to flow. The Buddha suffered intense pains and was removed by the monks to Maddakucchi. Desiring to go on to Jivaka’s Mango-grove, the Buddha said to the monks, “Carry me thither.” So the monks took the Buddha and carried him to Jivaka’s Mango-grove. When Jivaka heard the news, he immediately went to the Buddha and to heal the wound applied an ointment. Then he bound up the wound and said to the Buddha, “Venerable, I have a patient in the city. As soon as I have visited him, I will return. Let this dressing remain exactly as it is until I return.” So saying, Jivaka went and treated his patient. But the gate was closed when he returned, and he was therefore unable to enter. Thereupon the following thought occurred to him, “I have committed a grievous fault. I applied an astringent to the foot of the Buddha and bound up his wound, just as I should have bound up the wound of any other man. It is now time to remove the bandage. For if the bandage remains unbound all night long, the Buddha will suffer intense pain.”

At that moment the Buddha addressed the Venerable Ananda, “Ananda, Jivaka returned late in the evening and was unable to enter the gate. This was the thought in his mind, ‘Now it is time to remove the bandage’ Therefore remove the bandage, whereupon the scar disappeared like bark from a tree. At early dawn Jivaka hastened to the Buddha’s side and asked, “Venerable, did you suffer intense pain?” Said the Buddha, ‘Jivaka, all suffering is extinguished for the Buddha, even as when he sat on the Throne of Enlightenment’