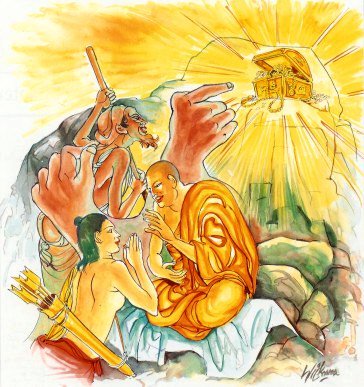 Should one a man of wisdom meet
who points out faults and gives reproof,
who lays a hidden treasure bare,
with such a sage should one consort.
Consorting so is one enriched
and never in decline.

Explanation: If one discovers a wise person who points out one’s errors and sternly corrects one, he should be looked upon as a benign revealer of a treasure. His company should be sought. Such association would make better persons of men.

The Story of Venerable Radha (Verse 76)

While residing at the Jetavana Monastery, the Buddha spoke this verse, with reference to Monk Radha, who was at one time a poor old brahmin.

Radha was a poor brahmin who stayed in the monastery doing small services for the monks. For his services he was provided with food and clothing and other needs, but was not encouraged to join the Sangha, although he had a strong desire to become a monk.

One day, early in the morning, when the Buddha surveyed the world with his supernormal power, he saw the poor brahmin in his vision and knew that he was due for arahat-ship. So the Buddha went to the old man, and learned from him that the monks of the monastery did not want him to join the Sangha. The Buddha therefore called all the monks to him and asked them, “Is there any monk here who recollects any good turn done to him by this old man?” To this question, Venerable Sariputta replied, “Venerable, I do recollect an instance when this old man offered me a spoonful of rice.” “If that be so,” the Buddha said, “shouldn’t you help your benefactor to get liberated from the ills of life?” Then Venerable Sariputta agreed to make the old man a monk and he was duly admitted to the Sangha. Venerable Sariputta guided the old monk and he strictly followed his guidance. Within a few days, the old monk attained arahatship.

When the Buddha next came to see the monks, they reported to him how strictly the old monk followed the guidance of Venerable Sariputta. To them, the Buddha replied that a monk should be amenable to guidance like Radha and should not resent when rebuked for any fault or failing.

Said the Buddha, “Venerable Sariputta was, in a previous life, the solitary elephant which presented the pure white elephant his son to the carpenters, in recognition of the service they did him in healing his foot.” Having said thus about Venerable Sariputta, he said, with reference to Venerable Radha, “Monks, when a fault is pointed out to a monk, he ought to be amenable to discipline like Radha and when he is admonished, he should not take offence.”