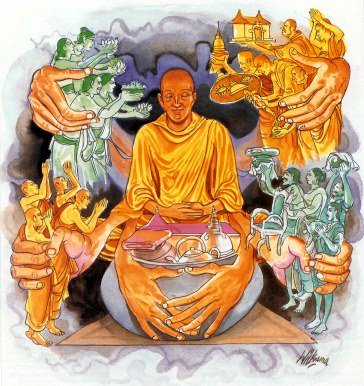 For position a fool may wish:
among the bhikkhus precedence,
in monasteries authority,
from other families honours.

Explanation: He is fond of being recognized for what he, in reality, is not. Yearns for pre-eminence among peers. He craves for preference in matters relating to residences. He is enamoured of the idea of receiving gifts and requisites from other families as well.

While residing at the Jetavana Monastery, the Buddha spoke these Verses, with reference to Venerable Sudhamma and Citta the householder.

A householder named Citta, residing in the city of Macchikasanda, observed the Venerable Mahanama, one of the band of five, making his round for alms; and pleased with his deportment, took his bowl, invited him into his house, provided him with food, and at the conclusion of the meal listened to the law and obtained the fruit of conversion. Now Citta, possessed of immovable faith, desiring to make his own pleasure-garden Ambatthaka Grove a place of residence for the Sangha, poured water into the right hand of the Venerable and made the grove move to the Sangha. The moment he uttered the words, “The Religion of the Buddha is firmly established” the earth shook to its ocean boundary. The great treasurer caused a splendid monastery to be erected in the grove, and thereafter the door stood open to monks who came from all four quarters. At Macchikasanda also resided the Venerable Sudhamma.

Some time afterwards, the two Chief Disciples, hearing the rumour of Citta’s good qualities, decided to pay their respects to him and therefore went to Macchikasanda. Citta the householder, hearing that they were coming, proceeded forth half a league to meet them, escorted them to the monastery, invited them, performed the usual duties for visitors, and then made the following request of the Buddha, “Venerable, we desire to listen to a short discourse on the Dhamma.” The Venerable replied, “Lay disciple, we are weary with the journey; nevertheless listen for a short while.” Citta, merely by listening to the Buddha’s discourse on the Dhamma, obtained the fruit of the second path. Then he bowed to the two chief disciples and invited them to be his guests, saying, “Venera-bles, pray take a meal in my house tomorrow with your thousand monks.” Then he turned to the resident monk, the Venerable Sudhamma, and invited him, saying to him, “Venerable, you also come tomorrow with the Venerables.” Angry at the thought, “He invited me last,” Sudhamma refused the invitation; and although Citta repeated the invitation again and again, he still refused. The lay disciple said, “Pray be present, Venerable,” and went out. On the following day he prepared splendid offerings in his own residence. Very early in the morning the Venerable Sudhamma thought to himself, ‘What manner of food has the householder prepared for the chief disciples? I will go see.” So very early in the morning he took bowl and robe and went to his house.

“Pray sit down, Venerable,” said the householder. I will not sit down,” replied Sudhamma; T am about to set out on my alms-round.” The Venerable surveyed the offerings prepared for the chief disciples, and seeking to annoy the householder about the varieties of food provided, said, “Householder, your food is most excellent, but there is one thing you have omitted.” “What is that, Reverend sir?” “Sesame-cake, householder.” Thereupon the householder rebuked him, comparing him to a crow. Angered at this, the Venerable said, ‘This is your residence, householder; I will depart.” Three times the householder strove to prevail upon the Venerable to remain, but each time the latter refused. Finally he left the house, went to the Buddha, and related the words that had passed between Citta and himself. The Buddha said, “You, an inferior, have insulted a faithful, believing disciple.” Having thus put the blame solely on the monk, the Buddha sent him back to beg pardon of the disciple. The Venerable went to Citta and said, “Householder, it was all my fault; please pardon me.” But the householder refused to pardon him and said, I will not pardon you.”

Provoked at his failure to obtain pardon, he returned to the Buddha. The Buddha, although he knew that the householder would pardon Sudhamma, thought, “This Venerable is stubborn in his pride; now let him go thirty leagues and come back.” And so, without telling him how he might gain pardon, he just dismissed him. The Venerable returned with pride humbled. The Buddha then gave the Venerable a companion and said to the Venerable, “Go with this companion and ask pardon of the householder.” Said the Buddha, “A religious person ought not to give way to pride or ill-will, thinking, ‘This residence is mine, this male lay disciple is mine, this female lay disciple is mine’ For if he so did, ill-will and pride and the other depravities increase.”

After listening to this admonition Venerable Sudhamma bowed to the Buddha, rose from his seat, circumambulated the Buddha, and then, accompanied by his companion-monk, went within sight of the lay disciple, atoned for his fault, and begged the disciple’s pardon. The lay disciple both pardoned him and in turn asked his pardon, saying, “I pardon you, Venerable; if I am to blame, pray pardon me also.” The Venerable held steadfast in the admonition given by the Buddha, and in but a few days attained arahatship together with the supernatural faculties.

The lay disciple thought to himself, “Even without seeing the Buddha I have attained the fruit of conversion; even without seeing him I have attained the Fruit of the second path. I ought to see the Buddha” So he ordered yoked five hundred carts full of sesame, rice, ghee, sugar, garments, coverlets, and other offerings, whether of food or aught else” He visited the Buddha, and spent one month giving alms to the Buddha and the monks. After a month, Venerable Ananda asked the Buddha, “Venerable, was it because he saw you that he received all these honours?” Said the Buddha, “Ananda, no matter what place such a man resorts to, he receives gain and honour.”