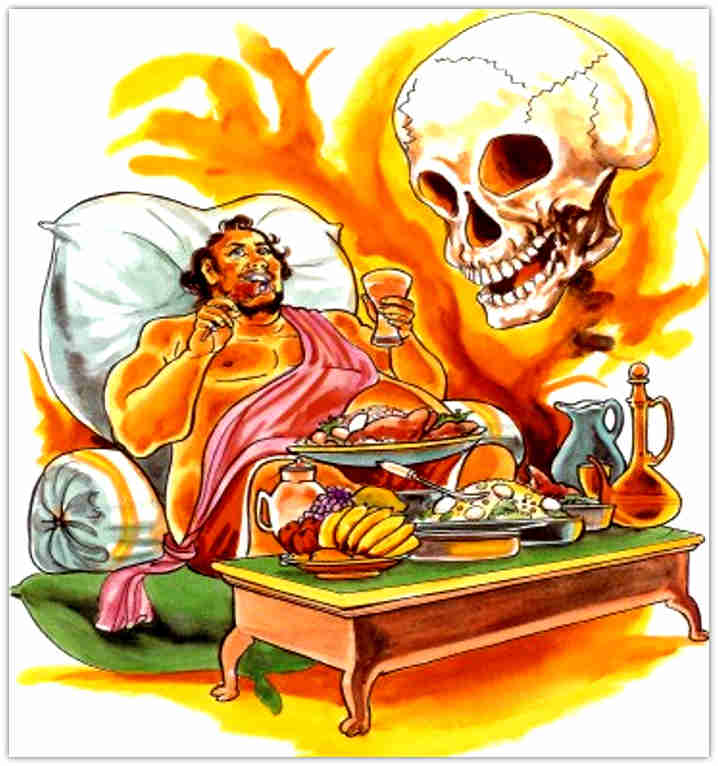 One who beauty contemplates,
whose faculties are unrestrained,
in food no moderation knows,
is languid, who is indolent:
that one does Mara overthrow
as wind a tree of little strength.

Explanation: Those who dwell on the attractiveness of sensual enjoyment, and live with the senses unguarded, and are immoderate in eating, they are slothful and weak in perseverance and will-power. Emotions overpower such persons easily as the wind overpowers a weak tree.

While residing in the neighbourhood of the town of Setavya, the Buddha uttered these verses, with reference to Mahakala and his brother Culakala. For Culakala, Majjhima Kala, and Mahakala were three householders who lived in Setavya, and they were brothers. Culakala and Mahakala, the oldest and youngest respectively, used to travel abroad with their caravan of five hundred carts and bring home goods to sell, and Majjhima Kala sold the goods they brought. Now on a certain occasion the two brothers, taking wares of various kinds in their five hundred carts, set out for Savatthi, and halting between Savatthi and Jetavana, unharnessed their carts. In the evening Mahakala saw Noble Disciples, residents of Savatthi, with garlands and perfumes in their hands, going to hear the Law. ” Where are they going? ” he asked. Receiving the answer that they were going to hear the Law, he thought to himself, “I will go too” So he addressed his youngest brother, “Dear brother, keep watch over the carts; I am going to hear the Law” So saying, he went and paid obeisance to the Buddha and sat down in the outer circle of the congregation.

On that day the Teacher preached the Law in orderly sequence with reference to Mahakala’s disposition of mind, and quoting the Sutta on the Aggregate of Suffering, and other Suttas, discoursed on the sinfulness and folly and contamination of sensual pleasures. Mahakala, after listening to the discourse, became a monk under the Teacher. Culakala likewise became a monk. But the thought in Culakala’s mind was, “After a time I will return to the world and take my brother with me”. Somewhat later Mahakala made his full profession, and approaching the Teacher, asked him, “How many duties are there in this Religion?” The Teacher informed him that there were two. Said Mahakala, “Venerable, since I became a monk in old age, I shall not be able to fulfill the Duty of Study, but I can fulfill the Duty of Contemplation.” So he had the Teacher instruct him in the Practice of meditation in a cemetery, which leads to Arahatship. At the end of the first watch, when everyone else was asleep, he went to the cemetery; and at dawn, before anyone else had risen, he returned to the Monastery.

Now a certain young woman of station was attacked by a disease, and the very moment the disease attacked her, she died, in the evening, without a sign of old age or weakness. In the evening her kinsfolk and friends brought her body to the burning-ground, with firewood, oil, and other requisites, and said to the keeper of the burning-ground, “Burn this body.” And paying the keeper the usual fee, they turned the body over to her and departed. When the keeper of the burning-ground removed the woman’s dress and beheld her beautiful golden-hued body, she straightway thought to herself, “This corpse is a suitable Subject of Meditation to show to His reverence.” So she went to the Venerable, paid obeisance to him, and said, “I have a remarkably good Subject of Meditation; pray look at it, Venerable.” “Very well,” said the Venerable. So he went and caused the dress which covered the corpse to be removed, and surveyed the body from the soles of the feet to the tips of the hair. Then he said, “Throw this beautiful golden-hued body into the fire, and as soon as the tongues of fire have laid hold of it, please tell me” So saying, he went to his own place and sat down. The keeper of the burning-ground did as she was told and went and informed the Venerable. The Venerable came and surveyed the body. Where the flames had touched the flesh, the color of her body was like that of a mottled cow; the feet stuck out and hung down; the hands were curled back; the forehead was without skin. The Venerable thought to himself, “This body, which but now caused those who looked thereon to forget the Sacred Word, has but now attained decay, has but now attained death.” And going to his night-quarters, he sat down, discerning clearly Decay and Death. Mahakala developed Spiritual Insight and attained Arahatship, together with the Supernatural Faculties.

When Mahakala attained Arahatship, the Buddha, surrounded by the Congregation of Monks, travelling from place to place, arrived at Setavya and entered the Simsapa forest. Culakala’s wives, hearing that the Buddha had arrived, thought to themselves, “Now we shall recover our husband.” So they went and invited the Buddha. Now when a visit is expected from the Buddha, it is customary for a single monk to go in advance and give warning. When Culakala went home to prepare for alms-giving his wives tore off his robes. Mahakala’s eight wives also thought that they would get their husband to give up the robes. One day, they arranged an alms-giving for the Buddha and the Disciples and asked the Buddha to leave Mahakala behind to pronounce the formula of thanksgiving after alms-giving. The Buddha left him at his former home and went away with the other disciples.

When the Buddha reached the village gate, the congregation of monks was offended and said, “What a thing for the Buddha to do! Did he do it wittingly or unwittingly? Yesterday Culakala came and that was the end of his monastic life. But today, a different monk came and nothing of the sort happened” The Buddha sent Mahakala back and continued on his way. Said the monks, “The monk Mahakala is virtuous and upright. Will they put an end to his monastic life?” Mahakala’s wives tried to make him a layman but he rose into the air through his psychic power as an Arahat and appeared before the Buddha as he was reciting these two verses. Monk Mahakala paid obeisance to the Buddha and the Buddha told the other monks that they were wrong about Arahat Mahakala to compare him with Monk Culakala.

Those who have a false idea of optimism and think that life is a bed of roses without thorns, they keep focusing on the pleasant side of life and ignore the unpleasant. As a result, they become attached to things and call them “this is mine” or “this is myself”. When these things to which they are attached change and are parted from them, they lament that what is “theirs” and what is “themselves” is breaking up and dying. Those who look at the unpleasant side of life, the thorns in the roses, have their attachments weaken. When this happens, the change and separation from attached objects do not bring about much sorrow or grief.

Asubhanupassana: does not mean the reflection on the pain-fulness of pain which produces hatred or aversion. That is called the cultivation of ‘the perception of repulsiveness’ (pathigha sanfta), which is also to be avoided. Its true meaning is the reflection on the bad side of sensual pleasure, which people often like to ignore, and in so doing, run into suffering, the very thing that they are trying to avoid. True optimism is not a one-sided view of life but an ability to see a solution to the problems in life. This is the optimism of Buddhism.

This pair of verses reveals the method of finding happiness in life, by giving up attachment to things of the world. The first step is to think realistically. Guarding the senses is learning to stop reacting to pleasant and unpleasant circumstances with desire and aversion. Exercising control in our eating habits and overcoming laziness are necessary to maintain the practice of focusing attention on right things and thereby clearing the thoughts of emotional attachments.