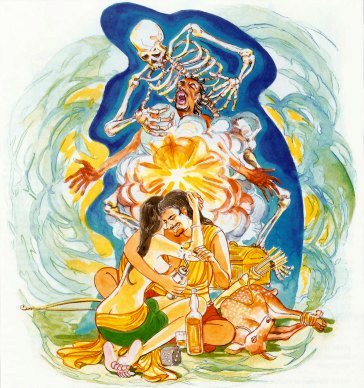 Fools of feeble wisdom fare
enemies to themselves,
making evil kamma
which is of bitter fruit.

Explanation: Those unwise foolish people behave in a manner that is harmful to themselves. Their sinful actions yield bitter fruit. They are their own enemy.

The Story of Suppabuddha, the Leper (Verse 66)

While residing at the Jetavana Monastery, the Buddha spoke this Verse, with reference to Suppabuddha, a leper.

For at that time the leper Suppabuddha, seated in the outer circle of the congregation, heard the Buddha preach the Dhamma and attained the fruit of conversion. Desiring to inform the Buddha of the blessing he had received, but not daring to force his way into the midst of the congregation, he waited until the populace had paid obeisance to the Buddha, had accompanied him a little way, and had turned back. Then he went to the Monastery.

So Suppabuddha the leper went to the Buddha, and the Buddha received him. And having informed the Buddha of the blessing he had received, he arose from his seat and went his way. Before he had gone very far, he was killed by a young heifer. We are told that this heifer was a female evil spirit who had been a cow in each of a hundred existences, and that as a cow she had killed four youths: Pukkusati, a young man of high station; Bahiya Daruciriya; Tambadathika, the robber outlaw; and Suppabuddha the leper.