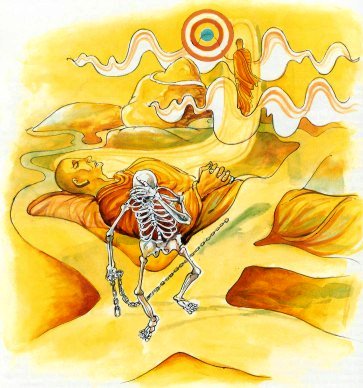 Of those with perfect virtue
who dwell in heedfulness,
freed by Final Knowledge
Mara cannot know their path.

Explanation: Of those noble one, who are perfect in behaviour, living constantly alert, fully aware of the experience within, Mara, the evil one, does not know their destiny. Mara can trace only the slothful dead. He cannot trace those who have reach the Deathless.

The Story of Venerable Godhika (Verse 57)

While residing at the Veluvana Monastery, the Buddha spoke this Verse, with reference to Venerable Godhika.

Accordingly, he took the razor with which he shaved his hair, and lay down on his bed, intending to end his life. Mara perceived his intention and thought to himself, “This monk intends to use the razor. Those who use the razor in this way are indifferent to life. Such men, having attained penetration, win Arahatship. But if I try to prevent him from carrying out his intention, he will pay no attention to my words. I will therefore induce the Buddha to prevent him.” At that moment the Venerable drew his knife. The Buddha, perceiving Mara, said, “Thus do those who are steadfast, nor do they yearn for life. Godhika has uprooted craving and has attained Nibbana.” Now the Buddha, accompanied by a large number of monks, entered the place where the Venerable had lain down and used his knife. At that moment Mara, the Evil One, like a pillar of smoke or a mass of darkness, was searching in all directions for the Venerable’s consciousness. Thought he, “Where has his rebirth-consciousness fixed itself? ” The Buddha pointed out to the monks the pillar of smoke and the mass of darkness and said to them, “Monks, that is Mara, the Evil One, searching for the consciousness of the goodly youth Godhika. Thinks he, ‘Where has the consciousness of the goodly youth Godhika fixed itself? But, monks, the consciousness of the goodly youth Godhika has not fixed itself. For, monks, the goodly youth Godhika has passed into Nib-bana. Mara, being unable to find the place where the consciousness of the Venerable had fixed itself, approached the Buddha and asked him, “Where has Godhika gone?”

Said the Buddha to Mara, “Godhika has uprooted craving and has attained Nibbana.” Then said the Buddha, “Evil One, what have you to do with the place where the consciousness of the goodly youth Godhika has fixed itself? A hundred or a thousand like you could never find it.”