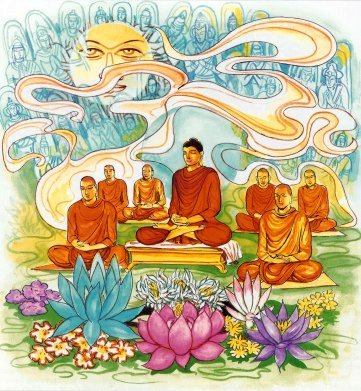 Explanation: The world knows, many a sweet smelling flower and fragrant object. But, the fragrance of these moves only leeward. None of these, however strong their fragrance may be, spread their sweet smell against the wind. But, in contrast, the sweet smell of virtue of a spiritually evolved individual spreads in all directions and is universally experienced.

While residing at the Jetavana Monastery, the Buddha spoke these verses, with reference to a question raised by the Venerable Ananda.

One evening, absorbed in meditation, Venerable Ananda pondered the following thought: “The Buddha possesses the three perfumes of excellence; namely, the perfume of sandal, the perfume of roots, and the perfume of flowers. However, each of these perfumes goes only with the wind. Is there possibly a substance whose perfume goes against the wind, or is there possibly a substance whose perfume goes both with the wind and against the wind?” Then the following thought occurred to him: ‘What is the use of my trying to determine this question all by myself? I will ask the Buddha, and the Buddha alone.” Accordingly he would approach the Buddha and put the question to him. The story goes:

On Ananda, a note:

Venerable Ananda was the personal attendant of the Buddha. The body of teaching that is presently characterized as Buddhism is largely the teachings gathered by Venerable Ananda as the constant companion of the Buddha. Venerable Ananda is, at times, referred to as the Treasurer of the Buddha Word’. How Venerable Ananda came to assume this exalted position has also been extensively recorded in Buddhist literature. The Buddha had no regular attendant during the first twenty years of His ministry. There were several monks who used to attend on the Buddha and accompany Him on the rounds for alms carrying his extra robes and the bowl. The monks who served thus were Nagasamala, Nagita, Upavana, Sunakkhatta, Cunda, Sagata, Radha, and Meghiya.

One day, as the Buddha went on a long journey accompanied by the Venerable Nagasamala, and came up to a junction, the monk suggested to take one road, whereas the Buddha suggested the other. The monk did not accept the words of the Buddha, and was about to put the bowl and the robes of the Buddha on the ground before taking the road of his choice. The Buddha asked for the bowl and the robes before they were put on the ground, and took the other road. The monk who went along the road of his choice was robbed of his bowl and robes and was struck on the head by highway robbers. He came back to the Buddha with a bleeding head, to be reminded of his disobedience and consoled by the Buddha.

On another day, as the Buddha was on his way to the village of Jantu in the company of the Venerable Meghiya, the latter chose to go to a mango grove and practice meditation, and handed over to the Buddha His bowl and the robes. The Buddha thrice advised him against taking that step, but he went his way. He returned to the Buddha and confessed how he failed in his meditation. When the Buddha came to Savatthi, and was in the Jetavana Monastery, he expressed to the assembly of monks His dissatisfaction with the conduct of these monks, and suggested to have a regular attendant as He was advancing in years. The Buddha was over fifty-five years in age at this time.

The Venerable Sariputta stood up immediately, saluted the Buddha, and volunteered to be the regular personal attendant of the Buddha. The Buddha declined his offer as his services as the foremost disciple of the Buddha was needed elsewhere. Other leading disciples too offered their services. However, they too were not accepted by the Buddha. Then the monks induced the Venerable Ananda, who was so far silent, to offer to serve as the personal attendant of the Buddha. However, he waited to be nominated by the Buddha Himself. The Buddha said: It is not necessary for Ananda to be induced by others. He will serve me on his own accord.”

After the Buddha consented to these eight conditions, the Venerable Ananda became the regular attendant of the Buddha. Thenceforth, he began to attend on the Buddha and serve hot and cold water and three kinds of dental tools. He used to massage the body of the Buddha, and be awakened the whole night, holding a wooden torch, so that he could be summoned by the Buddha at any time. He used to walk nine times round the fragrant chamber every night. He also did the sweeping and cleaning of the fragrant chamber himself. He served and followed the Buddha like His shadow until His passing away,

However, the Venerable Ananda did not attain arahathood during the lifetime of the Buddha. He became an arahant a few weeks after the passing away of the Buddha, and was a key figure in the First Council of the five hundred arahants who recited the teachings of the Buddha, at the invitation of the Venerable Maha Kassapa, at Rajagaha. Thus, many Suttas start with ‘evam me Sutam!