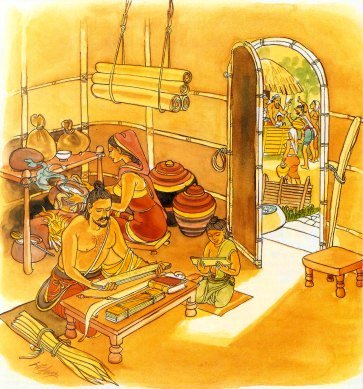 Not others’ opposition
nor what they did or failed to do,
but in oneself should be sought
things done, things left undone.

Explanation: Do not find fault with others. Do not worry about what others do or not do. Rather, look within yourself to find out what you yourself have done or left undone. Stop doing evil; do good.

The Story of the Ascetic Paveyya (Verse 50)

While residing at the Jetavana Monastery, the Buddha spoke this verse, with reference to the ascetic Paveyya and a rich lady.

Accordingly, when it was evening, she summoned her own son and sent him to the Buddha, saying to him, “Go, invite the Buddha to accept my hospitality for tomorrow.” The boy started out, but went first to the place of residence of the naked ascetic, greeted him, and sat down.

The neighbours smeared that house with cow-dung, decked it with the five kinds of flowers, including the Laja flower, and prepared a seat of great price, that the Buddha might sit therein.

The naked ascetic said to the lay disciple, “You are lost for applauding this man thus.” And he reviled both the female lay disciple and the Buddha in all manner of ways, and then ran off. The Buddha asked her, “Lay disciple, are you unable to fix your mind on my discourse?” “Good and Revered Sir,” she replied, “My mind is completely distraught by the insulting words of this naked ascetic.” Said the Buddha, “One should not consider the talk of such a heretic; one should regard only one’s own sins of commission and omission.”