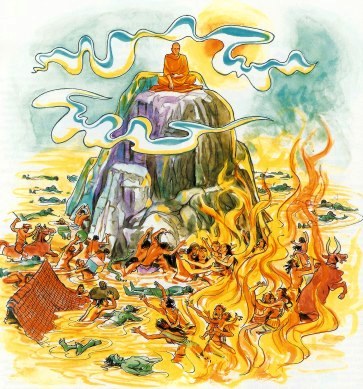 When one who’s wise does drive away
heedlessness by heedfulness,
having ascended wisdom’s tower
steadfast, one surveys the fools,
griefless, views the grieving folk,
as mountaineer does those below.

Explanation: The wise person is always mindful. Through this alertness he discards the ways of the slothful. The wise person ascends the tower of wisdom. Once he has attained that height he is capable of surveying the sorrowing masses with sorrowless eyes. Detached and dispassionate he sees these masses like a person atop a mountain peak, surveying the ground below.

The Story of Monk Mahakassapa (Verse 28)

While residing at the Jetavana Monastery, the Buddha spoke this verse, with reference to Monk Mahakassapa.

On a certain day, while the Buddha was in residence at the Pipphali Cave, he made his round of Rajagaha for alms and after he had returned from his round for alms and had eaten his breakfast, he sat down and using psychic powers surveyed with Supernormal Vision all living beings, both heedless and heedful, in the water, on the earth, in the mountains, and elsewhere, both coming into existence and passing out of existence.

The conception of suffering may be viewed from three aspects: (i) suffering as ordinary suffering, (ii) suffering as produced by change and (iii) suffering as conditioned states. All kinds of suffering in life like birth, old age, sickness, death, association with unpleasant persons and conditions, separation from beloved ones and pleasant conditions, not getting what one desires, grief, lamentation, distress – all such forms of physical and mental suffering, which are universally accepted as suffering or pain, are included in suffering as ordinary suffering. A happy feeling, a happy condition in life, is not permanent, not everlasting. It changes sooner or later. When it changes, it produces pain, suffering, unhappiness. This vicissitude is included in suffering as suffering produced by change. It is easy to understand the two forms of suffering mentioned above. No one will dispute them. This aspect of the First Noble Truth is more popularly known because it is easy to understand. It is common experience in our daily life. But the third form of suffering as conditioned states is the most important philosophical aspect of the First Noble Truth, and it requires some analytical explanation of what we consider as a ‘being’, as an ‘individual’ or as T. What we call a ‘being’, or an ‘individual’, or T, according to Buddhist philosophy, is only a combination of ever-changing physical and mental forces or energies, which may be divided into five groups or aggregates. dhiro bale avekkhati: The sorrowless Arahants look compassionately with their Divine Eye upon the ignorant folk, who, being subject to repeated births, are not free from sorrow.

When an understanding one discards heedlessness by heedfulness, he, free from sorrow, ascends to the palace of wisdom and surveys the sorrowing folk as a wise mountaineer surveys the ignorant groundlings.