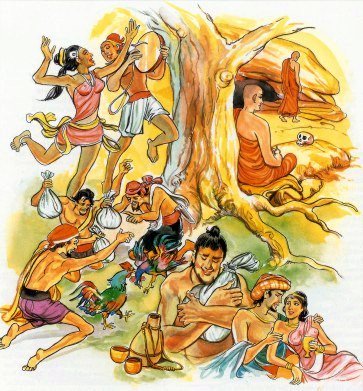 Foolish folk of little wit
in heedlessness indulge,
the one who’s wise guards heedfulness
kin to the greatest wealth.

Explanation: Those who are foolish and undiscriminating indulge in heedlessness. But the wise cherish mindfulness as a great treasure. The foolish people live a life of sensual pleasure. They indulge in pursuits that are not at all conductive to spiritual advancement. To obtain worldly acquisitions, people need wealth. In the same way, to obtain high spiritual acquisitions we need some wealth, and that wealth is mindfulness.

While residing at the Jetavana Monastery, the Buddha spoke these verses, in connection with the Bala Nakkhatta festival -the festival of simpletons.

On a certain date there was a simpletons 7 festival celebrated in Savatthi, and on the occasion of this foolish holiday, folk used to smear their bodies with ashes and cow-dung and for a period of seven days go about uttering all manner of coarse talk.

At this time people showed no respect for kinsfolk or friends or monks when they met them, but stood in the doorways and insulted them with coarse talk. Those who could not endure the coarse talk would pay the holiday-makers a half or a quarter or a penny, according to their means, and the holiday-makers would take the money and depart from their houses.

Now at this time there were in Savatthi five million Noble Disciples, and they sent word to the teacher, “Venerable, let the Buddha refrain for a period of seven days from entering the city with the congregation of monks; let him instead remain at the monastery” And, for a period of seven days the noble disciples caused food to be prepared for the congregation of monks at the monastery and sent it to them, but did not themselves leave their houses.

On the eighth day, however, when the festival was at an end, they invited the congregation of monks to be their guests, escorted them into the city, and gave abundant offerings. And having seated themselves respectfully on one side, they said to the Buddha, “Venerable, we have spent the past seven days unpleasantly. Our ears were about to burst from hearing the coarse talk of foolish folk. No one showed any respect for anybody else, and for this reason we did not permit you to enter the city. We ourselves did not go out of the house.”

The Buddha listened to what they said, and then replied, “In this manner unintelligent men conduct themselves. But they who are intelligent preserve heedfulness as their greatest treasure, and by so doing at last attain the attainment of the great Nibbana.”

bala: this is a categorization that occurs in most areas of Buddha’s teachings. The person referred to by this expression is generally thought of as an ignorant person, or as a foolish individual. But it does not mean that such a person is not adept in arts and crafts. What is meant is that the person so referred to is not sufficiently alert to reality – he is not capable of understanding the true nature of things. Such an individual’s behaviour is, at times, considered childish or immature, in terms of spiritual evolution. He is given to excessive self-indulgence and to the pursuit of sensual pleasures. He does not strive to become righteous, virtuous or to lead a life of good conduct. He does not know what is beneficial to him for this world and for the next. In modem psychological jargon, it means “an emotionally immature person”.

pamadam anuyunjanti: The term “pamada” literally means the “basic insanity” that all unenlightened people suffer from. It is being carried away by emotions and losing awareness of reality. It is lack of emotional control. It is the same thing as emotional immaturity. It may be also called “neurosis”. We translate it here as mindlessness or unmindfulness as opposed to mindfulness.

settham dhanam iva: The expression concerns the mindful. They protect their mindfulness as one would protect a great treasure. Those people who are sensuous, think in terms of wealth as a means of enjoying worldly pleasures. Therefore, to them worldly wealth is the only treasure that matters. In the old commentaries, worldly treasures are considered to be seven in number. They are gold, silver, pearls, gems, lapis lazuli, conch and the shila gem. But to the truth-seekers the treasures are mindfulness and steadfastness. These ensure the means of obtaining the highest Fruits of Spiritual Realization.