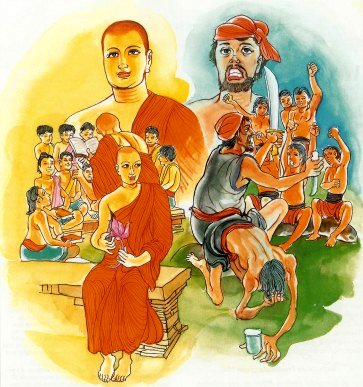 By oneself is evil done,
by oneself defiled,
by oneself it’s left undone,
by self alone one purified.
Purity, impurity on oneself depend,
no one can purify another.

The Story of Culakala Upasaka (Verse 165)

While residing at the Jetavana Monastery, the Buddha spoke this verse, with reference to Culakala, a lay disciple.

Culakala, a lay disciple, observed the Uposatha precepts on a certain fast-day and spent the night at the Jetavana Monastery, listening to religious discourses all through the night. Early in the morning, as he was washing his face at the pond near the monastery, some thieves dropped a bundle near him. The owners seeing him with the stolen property took him for a thief and beat him hard. Fortunately, some slave girls who had come to fetch water testified that they knew him and that he was not the thief. So Culakala was released.

When the Buddha was told about it, he said to Culakala, “You have been let off not only because the slave girls said that you were not the thief but also because you did not steal and were therefore innocent. Those who do evil go to niraya, but those who do good are reborn in the deva worlds or else realize Nibbana.” At the end of the discourse, Culakala the lay disciple attained sotapatti fruition.