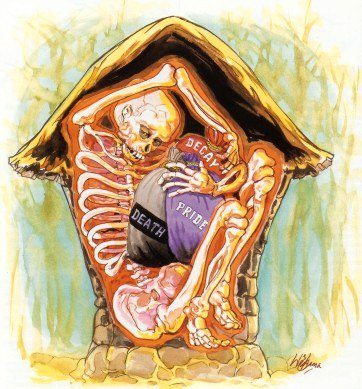 This city’s made of bones
plastered with flesh and blood,
within are stored decay and death,
besmearing and conceit.

Explanation: This body is made of bones which form its structure. This bare structure is plastered and filled with flesh and blood. Inside this citadel are deposited decay, death, pride and ingratitude.

While residing at the Jetavana Monastery, the Buddha spoke this verse, with reference to Janapadakalyani.

Princess Janapadakalyani was the daughter-in-law of Gotami, the step-mother of Gotama the Buddha; because she was very beautiful she was also known as Rupananda. She was married to Nanda, half brother of the Buddha. One day she pondered, “My elder brother who could have become a Universal Monarch has renounced the world to become a monk; he is now a Buddha. Rahula, the son of my elder brother, and my own husband Prince Nanda have also become monks. My mother Gotami has also become a nun, and I am all alone here!” So saying, she went to the monastery of some nuns and became a nun herself. Thus, she had become a nun not out of faith but only in imitation of others and because she felt lonely.

Rupananda had heard from others that the Buddha often taught impermanence, unsatisfactoriness and insub-stantiality of the khandhas (component things). So she thought he would talk deprecatingly about her good looks if he should see her; and thus thinking, she kept away from the Buddha. But other nuns, coming back from the monastery, kept talking in praise of the Buddha; so, one day, she decided to accompany other nuns to the monastery.

The Buddha saw her and reflected, “A thorn can only be taken out with a thorn; Rupananda being very attached to her body and being very proud of her beauty, I must take the pride and attachment out of her through beauty.” So, with his supernormal power, he caused an image of a very beautiful lady of about sixteen years of age to be seated near him, fanning him. This young girl was visible only to Rupananda and the Buddha. When Rupananda saw the girl, she realized that compared to that girl, she herself was just like an old, ugly crow compared to a beautiful white swan. Rupananda had a good look at the girl and she felt that she liked her very much. Then, she looked again and was surprised to find that the girl had grown to the age of about twenty. Again and again, she looked at the figure beside the Buddha and every time she noticed that the girl had grown older and older. Thus, the girl turned into a grown-up lady, then into a middle-aged lady, and a very old lady, successively. Rupananda also noticed that with the arising of a new image, the old image disappeared, and she came to realize that there was a continuous process of change and decay in the body. With the coming of this realization, her attachment to the body diminished. Meanwhile, the figure near the Buddha had turned into an old, decrepit lady, who could no longer control her bodily functions, and was rolling in her own excreta. Finally, she died, her body got bloated, pus and maggots came out of the nine openings and crows and vultures were trying to snatch at the dead body.

Having seen all these, Rupananda pondered, “This young girl has grown old and decrepit and died in this very place under my own eyes. In the same way, my body will also grow old and wear out; it will be subject to disease and I will also die” Thus, she came to perceive the true nature of the khandhas. At this point, the Buddha talked about the imper-manence, the unsatisfactoriness and the insubstantiality of the khandhas, and Rupananda attained sotapatti fruition.