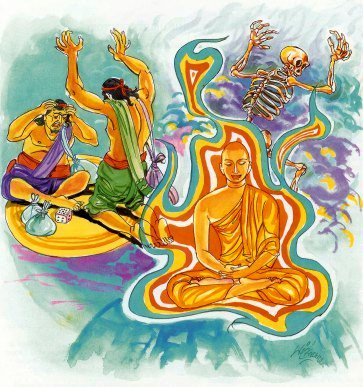 Explanation: Self conquest is greater than the conquest of others. The victory of one who conquers himself cannot be turned into defeat. He remains a self controlled individual who lives ever disciplined.

While residing at the Jetavana Monastery, the Buddha spoke these verses, with reference to the brahmin Anatthapucchaka.

On one occasion, a brahmin by the name of Anatthapucchaka, came to the Buddha and said to him, “Venerable, I think that you know only the practices that are beneficial and not the practices that are not beneficial” To him, the Buddha answered that he also knew the practices which were not beneficial and harmful. Then the Buddha enumerated six practices which cause dissipation of wealth; they are: (1) sleeping until the sun has risen, (2) habitual idleness, (3) cruelty, (4) indulgence in intoxicants which cause drunkenness and negligence, (5) sauntering alone in streets at unearthly hours, and (6) sexual misconduct.

When the brahmin heard this, he applauded the Buddha, saying, ‘Well said, well said, teacher of the multitude, leader of the multitude! You know indeed both gain and loss’ “Indeed, brahmin, there is none other that knows loss so well as I”. Then the Buddha considered within himself what motive actuated the brahmin, and asked him, “Brahmin, how do you make your living?” “By gambling, Venerable.” “But who wins, you or the other man?” “Sometimes I win and sometimes the other man wins.” Then said the Buddha, “Brahmin, a trifling matter is the victory of him who defeats another; there is no superior advantage in such a victory. But he who overcomes his depravities and so conquers self, wins a better victory, for such a victory no one can turn into defeat”